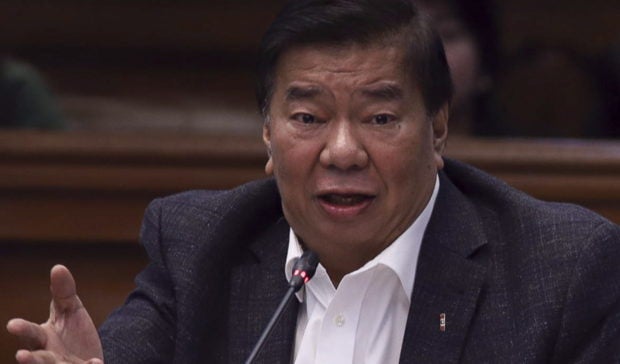 Drilon, in a privilege speech Tuesday, said the Senate should compel the small trading firm under the Department of Trade and Industry (DTI) to revert the P33.4 billion “parked” in its bank accounts to the national coffers.

“Clearly, government agencies are using PITC to skirt the end-of-the-year validity of appropriations. Thus, the funds are obligated before the appropriation expires…PITC effectively provides a mechanism to hide inefficiencies in government,” he said.

“The government is having difficulties raising funds due to the drop in revenues. But here you have government agencies depositing their budgets in PITC to make it appear that the funds are obligated, where, in truth and fact, it is sleeping in the coffers of PITC and interest is being earned,” he added.

Drilon said that if agencies cannot obligate and disburse the funds themselves, the appropriation will lapse, and the funds will revert to the national treasury.

This, according to the minority leader, will “negatively affect” the absorptive capacity of the government agencies and “can be used by the DBM to reduce their appropriation in the next budget cycle.”

Section 10 of the GAA mandates the reversion of funds when the terms have expired or when they are no longer necessary to attain the purposes for which the funds were established.

“Where the procurement goes through PITC, the source agency would not be liable for the bid process is not with the head of the procuring entity, but with PITC,” he said.

“Is this a scheme? PITC is being used as a pawn,” he added.

Earlier, Drilon flagged some P33.4 billion sitting idle in the bank accounts of the PITC as of December last year.

“PITC is holding P33.4 billion in its accounts as ‘trust liabilities,’ consisting of national agencies’ deposits, ranging from as low as P1,000 to as high as the Philippine Army’s P5.4 billion,” he said in his speech.

“Such a significant ‘trust liabilities’ account is prone to abuse, especially since PITC has a propensity to place funds made available to it, in money market instruments,” he added.

‘From face towels to fire stations’

Drilon also noted his surprise upon knowing the kind of procurements that PITC is undertaking for the government.

He pointed, however, that the PITC is created by law as a trading company.

“How is it that they are now engaged in the construction of fire stations, multipurpose halls, and lighthouses?” he added.

Drilon also questioned the authority of the PITC to impose service fees.

The PITC charges its clients, the majority of which are government agencies, a service fee ranging from one to four percent of the procurement contract, he noted.

“It posted service and business income of P784 million in 2019,” Drilon said.

“What is the authority of the PITC to impose such a service fee?” he added.

“P20 billion will be allocated for the purchase of vaccines through PITC. At a one-percent commission, that’s about P200 million. Apart from the COVID-19 funds, another P33.3 billion is in the books of PITC as deposits from other government agencies,” Drilon said.

The senator also said the PITC was flagged by the Governance Commission for GOCCs (GCG) “for failing to achieve the minimum acceptable accomplishment in the areas of social impact, financials and internal processes.”

“Its 76-percent failing mark confirms PITC’s poor track record. It failed to deliver billions of pesos worth of fire trucks, fire stations, and firearms, among others,” he added.

He said the PITC should return the P33.4 billion “parked” in its bank accounts to augment funds for the procurement of COVID-19 vaccines.

“We need funds to finance the procurement of vaccines, to address our 6.5 million housing backlog, to feed 5.5 million of hungry Filipinos, to support the 4.6 million unemployed Filipinos,” he said.

(Let’s not borrow money anymore. The PITC should return the P33.4 billion.)

Drilon then called on his colleagues to look at possible reforms in the government procurement processes.

Pangilinan suggested that an executive order be issued to bring the P33.4-billion worth of “sleeping” funds at the PITC back to the state’s coffers so that it can be used to purchase COVID-19 vaccines.

“Because we are in search of funds to purchase vaccines, then an executive order that mandates the return of these funds to the national treasury is well within the powers of the executive,” the senator said.

Meanwhile, Senator Aquilino “Koko” Pimentel said he is looking forward to a proper Senate committee hearing into the PITC.

“The PITC is really such a powerful corporation which is supposed to improve our domestic corporations in their trading with international partners,” Pimentel said.

“Perhaps, we should ask the concerned agencies why they tapped PITC for the procurement of their supplies and why they are not complaining when the PITC had failed to deliver their supplies over the last 10 years,” he added.