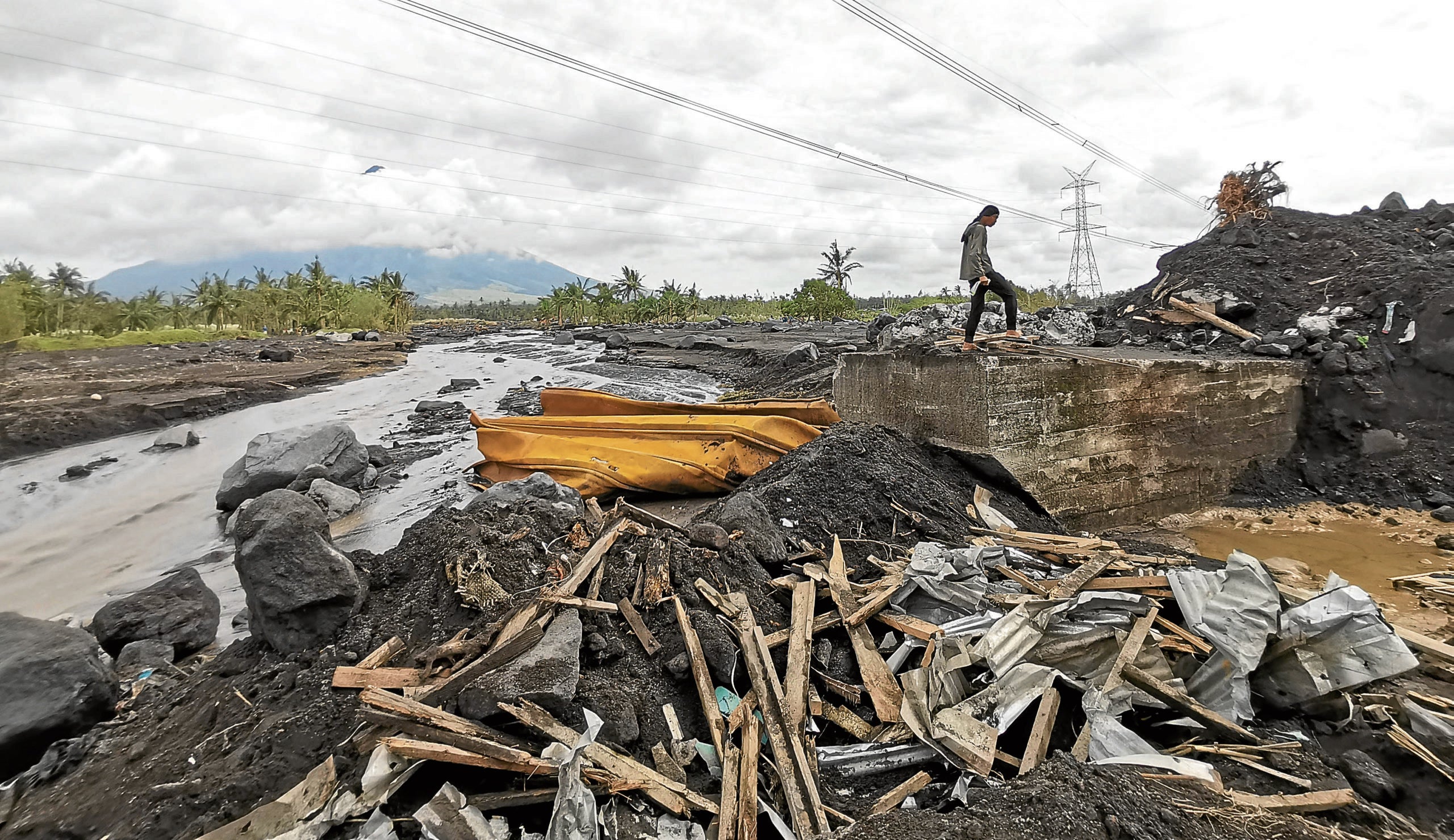 ‘ROLLY’ AFTERMATH A resident of San Francisco village in Guinobatan, Albay, walks by a river dike destroyed by heavy mudflow and boulders washed down from the slopes of Mayon Volcano after Typhoon “Rolly” battered Bicol region on Nov. 1. —GEORGE GIO BRONDIAL

LEGAZPI CITY—At least 15 quarry operators extracting aggregates around Mayon Volcano were found to have violated their permits and were recommended to face sanctions, the Mines and Geosciences Bureau (MGB) said on Monday.

Guillermo Molina Jr., MGB director for Bicol, said investigators from the Task Force Quarry sent by Environment Secretary Roy Cimatu reviewed the documents of 106 operators but found only 15 that had not complied with the provisions of permits issued by the Albay provincial government.

The Department of Environment and Natural Resources conducted the probe on orders of President Duterte after he visited survivors of flash floods triggered by Typhoon “Rolly” (international name: Goni) in Albay early this month. Residents blamed quarrying around Mayon as among the major causes of the disaster.

Molina said nine operators were found to be extracting sand and gravel in areas outside of their quarry areas, while the rest either had no permits, or were operating with expired permits.

“Quarry regulations dictate that an operator is allowed to extract aggregate in river channels not to exceed five hectares of a town,” he said.

According to Molina, only one of the 15 operators has an industrial sand and gravel permit, allowing it to stockpile extracted aggregates. The rest are considered commercial quarry operators allowed to haul and load sand and gravel.

Molina said the task force’s findings would be endorsed to the Environmental Management Bureau so it could suspend the erring operators’ environmental clearance certificates (ECC), or ask violators to rehabilitate their quarry areas.

The task force, upon consultation with the local governments, has recommended the lifting of the suspension order on quarry firms complying with their ECC and permits.
Sand and gravel extraction, according to the investigation’s findings, was done in lahar channels, noting that villages along these areas are naturally at risk to lahar and mudflows.

Lahar deposits found outside the channels in Guinobatan and Camalig towns and the cities of Tabaco and Legazpi have been largely due to “natural processes,” the task force said.

The task force has recommended the immediate relocation of residents in the villages of Bantayan in Tabaco City, and Travesia and San Francisco in Guinobatan.

It proposed the conduct of a detailed study of lahar flows that hit Guinobatan, Camalig and Daraga, particularly within and along the channels in the villages of Maninila, Quirangay and Mi-isi.

Among its other recommendations is the further study on erosion and deposit sites on the lower slopes of Mayon Volcano to determine the most suitable areas for sand and gravel quarrying and extraction. INQ

Read Next
Cebu City lawyer dead in gun attack
EDITORS' PICK
Bongbong Marcos says PH ‘open for business’ with new Clark Airport terminal
Individuals affected by ‘Karding’ now over 157,000
Newbie gamers are in for a treat with the power-packed feature of vivo Y16
Karding damage to infrastructure at P23M
House energy committee chair Arroyo bats for cheap electricity
Reignite your passion with the vivo Y35
MOST READ
Angelica Panganiban ‘duguan, sugatang mom’ one week into breastfeeding
LPA enters PAR, may develop into tropical depression
Badoy not with Office of the President, NTF-Elcac, under Marcos admin — solon
Charges readied vs gov’t guard with P290-M deposits
Don't miss out on the latest news and information.