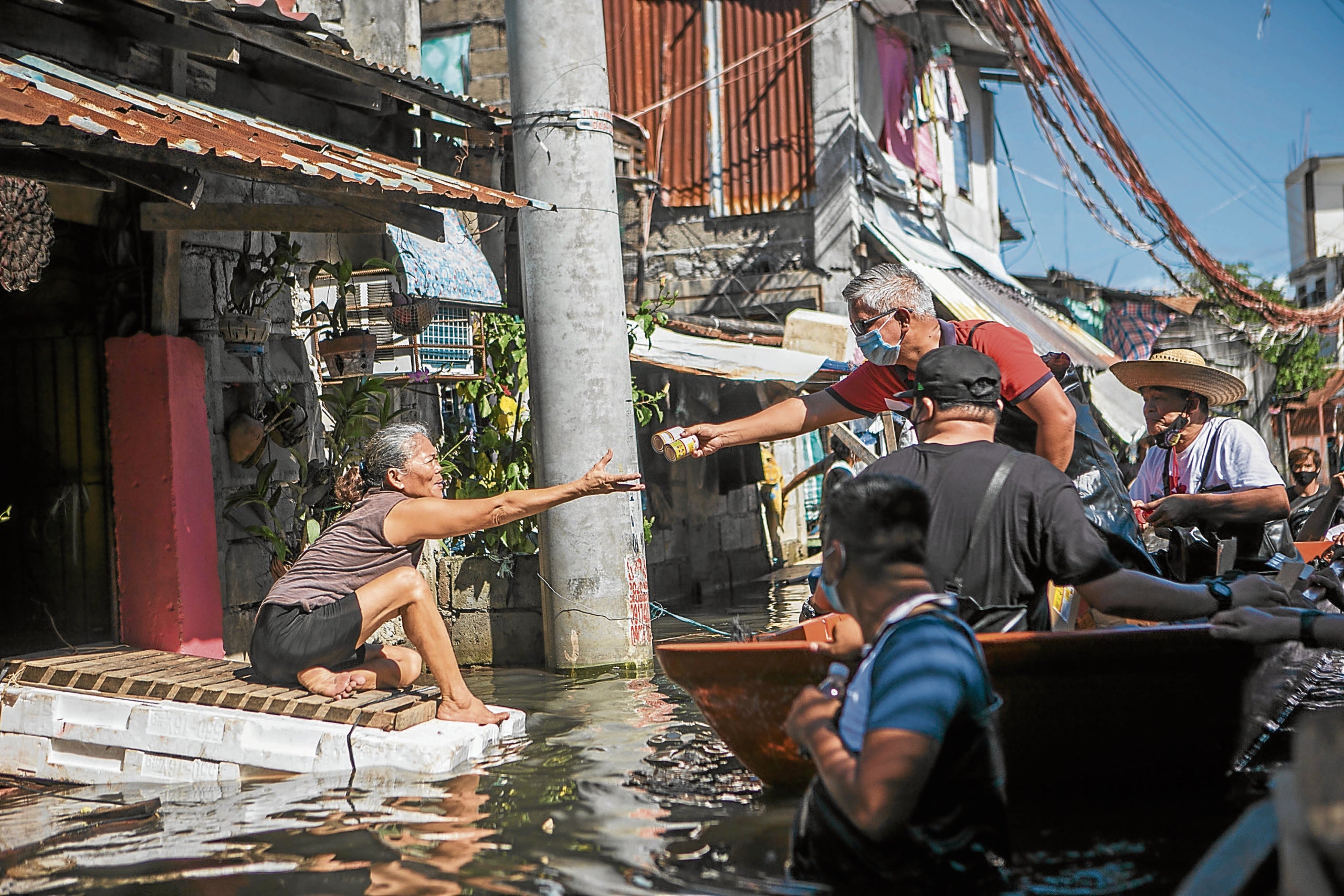 AID DELIVERY A team from the Biñan City government uses a boat to bring relief goods to residents in neighborhoods that remain flooded two weeks after the onslaught of Typhoon “Ulysses.” —JERY JIMENEZ/CONTRIBUTOR

The Regional Disaster Risk Reduction and Management Council (RDRRMC) in Calabarzon (Cavite, Laguna, Batangas, Rizal and Quezon) said the cities of Calamba, San Pedro and Biñan, and the towns of Santa Cruz and Pila in Laguna province, mainly lakeshore communities, remained under knee- to waist-deep floodwater.

But Cejo and officials like Biñan Mayor Walfredo Dimaguila Jr. believed they could only do so much since Laguna de Bay, a natural catch basin, was full to the brim.
“There’s nowhere else the water could go but to the Laguna lake, or we just wait for it to dry up if—and only if—it doesn’t rain [in the coming weeks],” Dimaguila said in a phone interview.

The flooding in Laguna may last a month until the lake water level returns to its normal 12.5 meters, said Emiterio Hernandez, environmental regulatory department chief of the Laguna Lake Development Authority.

Water level in the lake was at 12.9 meters after Ulysses dumped heavy rain while crossing the region during the second week of November.
“We also think it’s [because of] the flood draining down from Rizal province,” Cejo said.

Without any other means of transport but pedicabs (“padyak”) or tricycles, most residents in Barangay Landayan here wade through knee-deep flood in going to the public market or their workplaces, said resident Aldus Alba.

He said the water had started to smell “like it came from the sewer.”

“We can hang on [until the flood subsides], but I just hope they give us some rubber boots,” said another resident, Darwin Pili.

Nico Pavino, San Pedro disaster management officer, said the villages of San Roque and Cuyab were still underwater, while in Biñan, residents in the villages of Malaban and Dela Paz were using wooden boats to move around the neighborhood.

The RDRRMC said 12,413 families (51,631 people) were still in evacuation centers across Calabarzon as of Sunday.

Ulysses left 18 people dead and a P217 million worth of damage to infrastructure and agriculture in the region.

Read Next
MGB: 15 quarry firms in Albay violated permits
EDITORS' PICK
Philippines, US to begin 2-week joint ‘Balikatan’ exercises on Monday
‘NCR Plus’ to be under MECQ starting April 12 until April 30 — Palace
Pre-order the new vivo Y20s [G] to get a free TWS earphone
Metro Manila to have shortened curfew hours from 8 p.m. to 5 a.m. under MECQ
Speed up your game with the new vivo Y20s [G]
Pru Life UK receives four golden arrows for solid corporate governance
MOST READ
Stop ‘creeping occupation’ of ‘militia’ boats in WPS, Pacquiao asks China
Bea Alonzo clarifies status of her relationship with Dominic Roque
Convicted former aide of Sen. Bong Revilla dies — BuCor
Locsin to China: ‘Then move out’
Don't miss out on the latest news and information.