MANILA, Philippines — Saying it does not tolerate stereotyping, the Department of Education (DepEd) on Thursday assured senators that they would investigate a learning material which portrayed a stereotype against farmers.

As the Senate deliberated on DepEd’s 2021 proposed budget, Senator Francis Pangilinan called the attention of the agency over learning materials which featured a family of a farmer wearing torn clothes.

“This is a long-standing, centuries-old bias against farming and agriculture. We don’t want to teach children to look down upon farming and farmers,” Pangilinan said.

“We understand that the vast majority of the farmers are poor but to stereotype them parang ano ang magiging mensahe sa ating kabataan?” he added.

(We understand that the vast majority of the farmers are poor but to stereotype them what type of message are we sending out to the youth?) 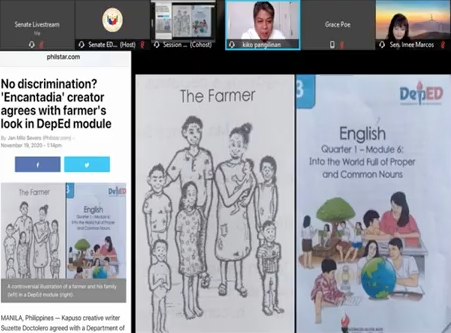 In a response, read by DepEd budget sponsor Senator Pia Cayetano, Secretary Leonor Briones said the agency “has a zero tolerance policy against stereotyping and other forms of discrimination.”

“Rest assured that we will look into this matter and whether this is really from DepEd and conduct a full investigation regarding the incident. Sanctions will be imposed,” Cayetano quoted Briones as saying.

Earlier in the deliberation, Senator Grace Poe also called out DepEd over an exam which mentioned the personality as “obese.”

(How did that slip through?)

Cayetano said the material Poe was referring to was an exam created by a teacher in Occidental Mindoro.

“I’ve been informed that the teacher is currently under administrative investigation by the department,” Cayetano said.