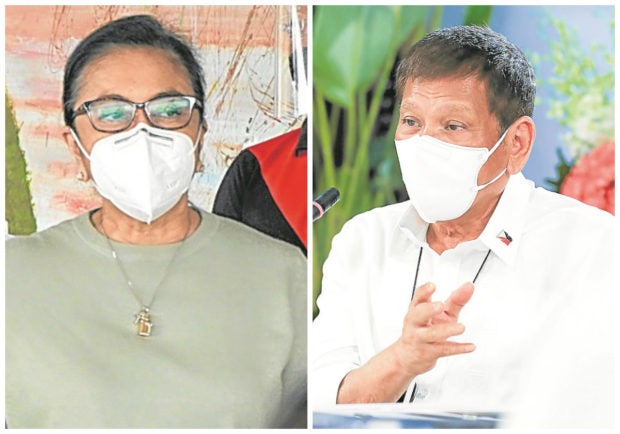 MANILA, Philippines — Vice President Leni Robredo denied on Wednesday breaking the chain of command by giving orders to the military and police during rescue and relief operations in Cagayan Valley, which was during the onslaught of Typhoon Ulysses.

She was reacting to the outburst of President Rodrigo Duterte on Tuesday night when she accused her of  “grandstanding” by making it appear that she was issuing orders to the Armed Forces of the Philippines (AFP_ and the Philippine National Police (PNP) during the operations in Cagayan Valley.

In an interview with CNN Philippines’ “News Night,” Robredo said she merely formed a team that passed on to the AFP and PNP information from people about the situation in the provinces of Isabela and Cagayan, which were massively flooded.

“I don’t know what he means that I gave orders to the AFP. But for me, if you review my tweets on that fateful night of Friday, I said nothing about ordering the PNP. What I said was I formed a team and that I will throw to them everything sent to me and they will be the ones to look for help on the ground,” she said in Filipino.

According to her, the team was formed on Wednesday night when she realized that what was happening was in other areas was what she saw in Ragay town in Camarines Sur.

She said all the team did was to contact people in the AFP, PNP, and other organizations. She never called to give orders to any AFP official — contrary to what Duterte was insinuating.

The Vice President said she had to respond to the queries on Twitter last Friday — when Cagayan Valley was already flooded.

She said she imagined people sitting on roofs in the dark, water rushing all around them. And they were tweeting all night, but nobody was responding.

So she decided to retweet those distress calls.

“Why was I doing that? Under that situation, the most important thing, number one, is that acknowledge that ‘we heard you, we got your distress call.’ Number two: ‘Help is coming.’ Number three: ‘ We are doing what we can to save you,’” she said.

On Tuesday night, Duterte told Robredo not to compete with him as the chain of command for AFP and PNP starts with the president — not the vice president.

Presidential spokesperson Harry Roque also said that Robredo made it appear that she was in charge, even though she was not.

But the AFP top brass said that there was no high-level coordination between them and Robredo.

Twitter was flooded on Friday night with calls for rescue as Cagayan Valley was submerged in water as high as 13 meters after Magat Dam, which sits on a Cagayan River tributary, rose to a critical level because of the typhoon.

Photos sent by Isabela residents to INQUIRER.net showed the flood reaching two-story houses in Santa Maria town in Isabela, forcing residents to spend the night on their rooftops.

Robredo then turned her Twitter page into a hotline for people seeking help with her staffing relaying the message to authorities.

Robredo discusses Cagayan rescue with military, but aerial response may be out

Robredo assures Cagayan Valley: We heard you, gov’t finding ways to reach you