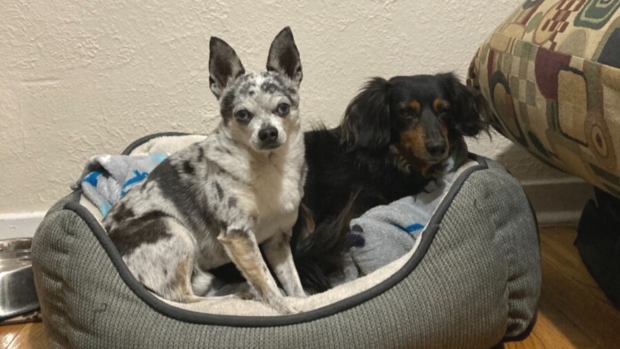 The dachshund named Winston (right) and his friend Mijo before the incident (Image: GoFundMe/Sarah Moore)

A dachshund is being hailed a hero after it saved its smaller canine friend from a mountain lion in Colorado in the United States.

The two dogs’ owners, Sarah Moore and Lindsay Golden, were visiting Moore’s mother on Nov. 7 when the pets slipped out through an open door. Shortly after, a nearby mountain lion grabbed the smaller dog in its jaws, as per the NBC-affiliate KUSA on Nov. 13.

While the wild animal held on to the chihuahua-dachshund mix named Mijo, his brave friend Winston, a pure dachshund, rushed to his side. Winston then began barking at the large feline until it dropped Mijo onto the ground and fled.

Mijo’s owner, Golden, immediately picked him up and headed for an emergency veterinarian’s clinic. Following the attack, they discovered that the 15-year-old dog had lost his right eye and sustained several injuries.

The two girls have since set up a crowdfunding page to help them pay for treatments Mijo needs to recover. Among them is a magnetic resonance imaging (MRI) scan to determine if he has a blood clot or neurological issues.

“It is an absolute miracle that this little guy is still alive,” Moore and Golden said. They also assured that they are “monitoring him 24/7 and are so impressed by his strength and determination to live.”

“This could be a long road to recovery,” the friends admitted, “but we have no doubt that her little man will survive.” Ryan Arcadio /ra