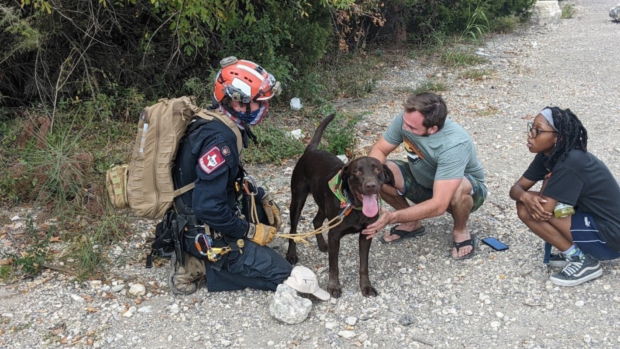 A pet dog surprised an emergency responder after it survived a 70-foot fall from a cliff in Texas, United States, with minimal injuries.

Special operations training captain R. Luddy was having lunch by the Pennybacker bridge last Friday, Nov. 13, when he learned of the accident. While waiting for his colleagues for rope training, several people suddenly approached him, as per the Austin-Travis Country Emergency Medical Services’ post on Facebook on the same day.

The group asked Luddy if he could help a dog named Stout that had fallen off of a nearby cliff. Upon hearing the story, the captain quickly agreed and headed for the animal.

“I grabbed my med bag and ropes, and started running towards the scene,” he said. “I called Medic 17 (who was on the way for training) and told them what was going on.”

“I got to the top of the cliff and found the owner, who had been calling to his dog franticly with no response,” Luddy added.

Once the owner pointed out where Stout had fallen from, Luddy hooked an anchor strap to a tree and rappelled down the cliff.

Heads up all you dog lovers, this is a scary story with a happy, feel good ending!Special Operations Training Captain…

Two clinical specialists soon followed and prepared a haul system as a contingency. However, Luddy did not need it as he located Stout after a short time and created a leash out of rescue ropes to lead it down a trail.

Luddy also assured that Stout was “miraculously, mostly unharmed” after the fall as he reunited him with his owner.

“He must have fallen about 70 feet, and hit a few branches and bushes on the way down,” Captain Luddy said. “I was ecstatic to find him in such good condition.”

Following the rescue, Luddy sent Stout and his owner to a veterinarian to ensure that the dog was indeed healthy. JB