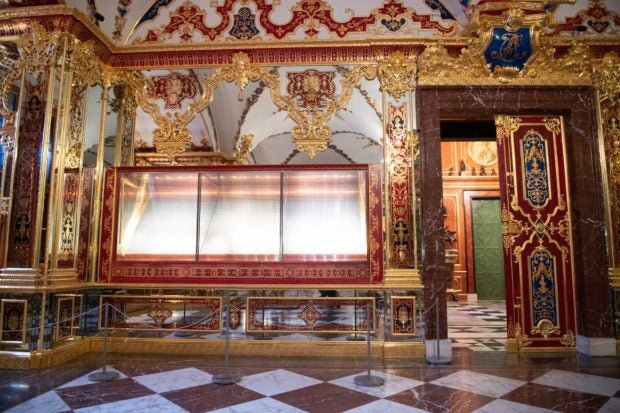 This photo taken on April 29, 2020, shows the empty showcase from which jewels were stolen in November 2019 in one of the rooms in the Green Vault (Gruenes Gewoelbe) at the Royal Palace in Dresden, eastern Germany. – German police on Tuesday, November 17, 2020, arrested three suspects over a spectacular heist a year ago in which more than a dozen diamond-encrusted items were snatched from the state museum in Dresden. (Photo by Sebastian Kahnert / dpa / AFP) / Germany OUT

BERLIN — German police on Tuesday arrested three suspects and raided properties over a spectacular heist a year ago in which more than a dozen diamond-encrusted items were snatched from a state museum in Dresden.

Investigators were searching 18 properties in Berlin, including 10 apartments as well as garages and vehicles, in connection to what local media had dubbed the biggest art heist in modern history.

“The measures today are focused on the search for the stolen art treasures and possible evidence, such as data storage media, clothing, and tools,” police and prosecutors said in a statement.

The robbers had launched their brazen raid on the Green Vault museum in Dresden’s Royal Palace on November 25, 2019.

Having initiated a partial power cut and broken in through a window, they had snatched priceless 18th-century jewelry from the collection of the Saxon ruler August the Strong.

Items stolen included a sword whose hilt is encrusted with nine large and 770 smaller diamonds and a shoulder piece that contains the famous 49-carat Dresden white diamond, Dresden’s Royal Palace had said.

The director of Dresden’s state art collection, Marion Ackermann, had refused to put a value on the stolen items, calling them “priceless.”

Dramatic CCTV footage released at that time showed one of the robbers breaking into a display case with an ax.

Police hunting for the suspects had launched several appeals, offering up to half a million euros in reward for information leading to their arrests.

On Tuesday, around 1,600 officers were deployed in the raids and arrests, with special reinforcements called in from across the country to help in what was code-named Special Commission Epaulette — after one of the stolen precious pieces. 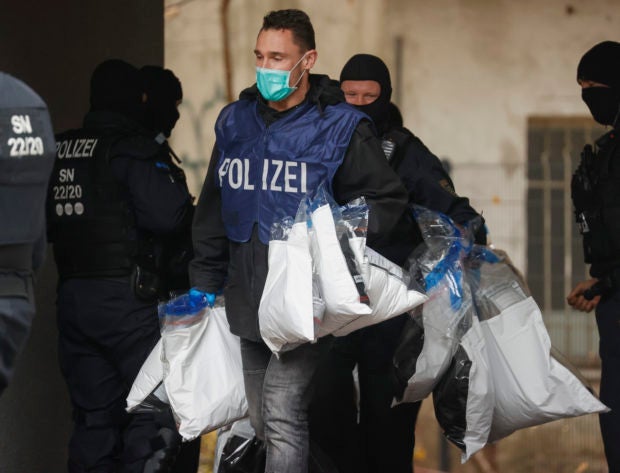 Police carry bags full of evidence out of a courtyard in Berlin’s Neukoelln district during raids of properties on November 17, 2020, in connection with a spectacular heist on Green Vault museum in Dresden’s Royal Palace on November 25, 2019. – German police on November 17, 2020, arrested three suspects over a spectacular heist a year ago in which more than a dozen diamond-encrusted items were snatched from a state museum in Dresden. Investigators were also raiding 18 properties in Berlin, including 10 apartments as well as garages and vehicles, police and prosecutors said in a statement. (Photo by Odd ANDERSEN / AFP)

Police did not name the three arrested, but said they are German citizens.

All three are accused of “serious gang robbery and two counts of arson,” said Dresden prosecutors.

Germany’s best-selling daily Bild said several of the addresses raided in Berlin on Tuesday were linked to a family of Arab origin notorious for ties to organized crime.

The so-called “Remmo clan” had been implicated in another high-profile museum robbery in the heart of Berlin in which a 100-kilogram (220-pound) gold coin was stolen.

Two in three of the suspects convicted in February in that case belonged to the family.

Police have found no trace of the Canadian coin since the late-night heist in March 2017 from the Bode Museum, located close to Chancellor Angela Merkel’s Berlin apartment.

The “Big Maple Leaf,” one of five minted in 2007, is considered the world’s second-largest gold coin after the one-ton Australian Kangaroo issued in 2012.

Investigators probing the Dresden break-in had said they were examining links to the gold coin robbery.

In recent years, so-called “clans” of primarily Middle Eastern origin have become a particular focus for police in Berlin.

Investigators last year targeted the Remmos with the seizure of 77 properties worth a total of 9.3 million euros, charging that they were purchased with the proceeds of various crimes, including a 2014 bank robbery.

In another huge heist this month, robbers hit a German customs office, making off with 6.5 million euros ($7.7 million) in cash.

Investigators said they drilled through a basement cellar through to the vault, snatching bags of cash.

Police have offered 100,000 euros in reward for information leading to the arrest and/or conviction of the suspects.