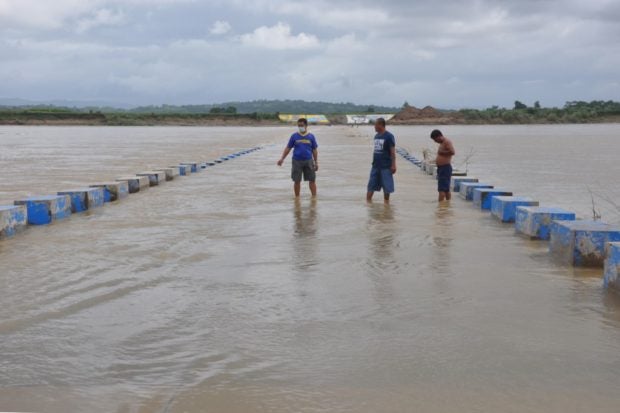 Residents wade in a flooded bridge over a swollen river due to heavy rains in Ilagan town, Isabela province north of Manila on October 31, 2020, ahead of Typhoon Goni’s landfall in the Philippines. (Photo by Villamor Visaya / AFP)

Urgently rehabilitating farmlands hit by the typhoons “is a must if we want to eat tomorrow,” Recto said in a statement.

“Helping the farmers in these areas helps us more than it helps them. COVID kills by hunger. We should not allow typhoons to make a pandemic more brutal,” he said.

“The rehabilitation of farms damaged by the typhoons should be expressed explicitly in the 2021 budget. It is like buying a vaccine against hunger, which is more lethal than the virus. Farmers fed us during this pandemic. It is time to return the favor,” he added.

The Department of Agriculture earlier reported that a total of P10 billion in agriculture was lost as Typhoons Quinta, Rolly and Ulysses battered the country.

“They combine into one contiguous agricultural powerhouse, a major contributor to the only sector which by posting growth over the past three quarters has proved itself to be pandemic-proof,” the senator also said.

“It cannot be immune to changes required to fix the destruction disasters have wrought,” he added.

“In a country that sits atop the earthquake corridor and is the doormat to the typhoon alley, it is but inevitable that disasters become macroeconomic assumptions of the national budget,” he further said.