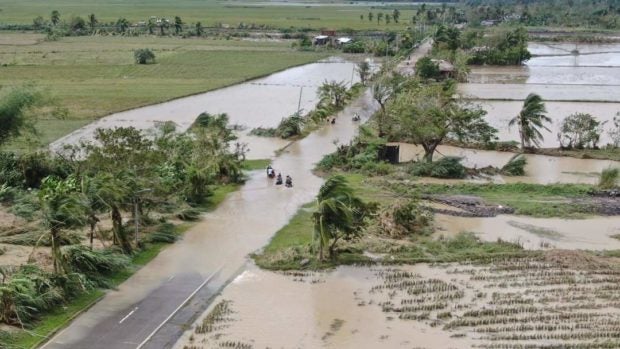 MANILA, Philippines — The Department of Agriculture (DA) on Saturday said it has recorded a total of P10 billion loss in agriculture as Typhoons Quinta, Rolly and Ulysses battered the country.

(As of this morning, from Typhoon Quinta, Rolly and Ulysses—this does not include the flooding in Isabela and Cagayan — losses in agriculture has already reached P10 billion.)

Dar was referring to the massive flooding that hit Cagayan and Isabela also due to Typhoon Ulysses. Both provinces are now placed under a state of calamity.

The agriculture chief, meanwhile, added that the losses are a big setback to food security.

He also said that the three powerful typhoons affected 150,00 farmers and destroyed 275,000 hectares of land.

(In terms of the commodities, those that were severely damaged considering the impact of the three typhoons, are high-value commodities such as abaca in Catanduanes.)

Rice was also one of the most affected commodities, Dar added.

Meanwhile, Dar said that the DA has been giving assistance to farmers, such as extending P10,000 to P15,000 for crop insurance indemnification.

Farmers and fisherfolk may also avail of loans with a maximum of P25,000 for emergency purposes, Dar added.