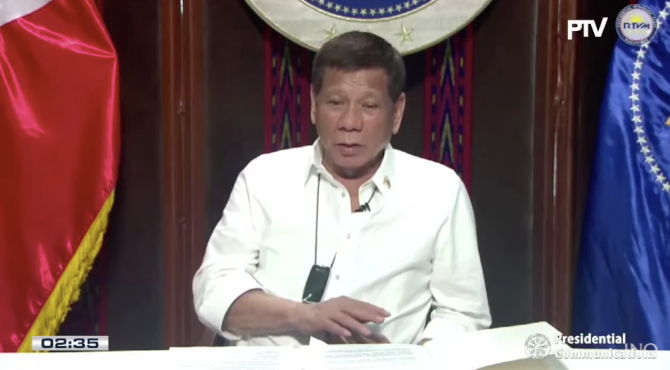 MANILA, Philippines — Despite attending the 37th Asean Summit, President Rodrigo Duterte is on top of the calamity situation as massive floods hit parts of Cagayan Valley due to the onslaught of Typhoon Ulysses, Malacañang said Saturday.

(The President is saddened by what happened. The problem is that the Asean summit is happening but now the president is closely monitoring the situation in Region 2.)

He added that it was Foreign Affairs Secretary Teodoro Locsin Jr. who read Duterte’s speech as the President was supervising to send efforts, particularly search and rescue operations for those affected in the Cagayan region.

“The president is on top the situation, he is in constant communication with (Department of National Defense) Secretary Delfin Lorenzana and Undersecretary (Ricardo) Jalad of the NDRRMC (National Disaster Risk Reduction and Management Council) at ganyan din ang kanyang koordinasyon sa (that’s also the coordination with) DSWD (Department of Social Welfare and Development) and DOH (Department of Health),” he added.

In a separate statement, Roque said that as early as Friday, the Department of Transportation, through the Philippine Coast Guard (PCG), has been working “round-the-clock” to rescue those affected by the floods in Region 2.

“At around 3:30 a.m. today, November 14, the PCG already deployed the first convoy of augmentation, composed of 10 rescue personnel, one multipurpose vehicle, one truck, and several newly-procured rubber boats,” he said. “As of 9 a.m. today, the PCG safely deployed the second convoy of deployable response groups (DRGs) to aid the ongoing rescue operations in Isabela, Tuguegarao, and Cagayan.”

“Said DRGs are composed of 60 rescue and medical personnel, two buses, one 12-wheeler boom truck, two M-35 trucks, and a total of seven drivers.  They are also equipped with two rubber boats and three generator sets, as well as 44 drums of fuel for the rescue assets and vehicles,” he added.