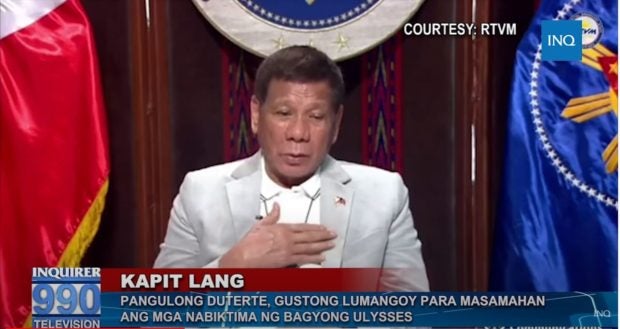 MANILA, Philippines — Critics need not ask for the whereabouts of President Rodrigo Duterte in times of crisis and calamities as he always monitors the situation on the ground, Malacañang said Friday.

(They should not ask where the President is, that’s just the opposition’s nonsense. The President is never away, he’s always with us.)

(He never stops thinking about the welfare of the people. The opposition should stop it.)

Roque noted that with the help of technology, the President is able to monitor the situation on the ground when calamities strike.

(What’s important is that the President is there to remind all government agencies to give it their all to help our countrymen in need.)

Asked why the President is not presiding over the meeting with key government officials, Roque said Duterte has to attend the Association of Southeast Asian Nations Summit and perform his role as the chief architect of the country’s foreign policy.

Duterte himself responded to critics questioning his supposed inaction as Typhoon Ulysses battered Metro Manila and parts of Luzon on Thursday.