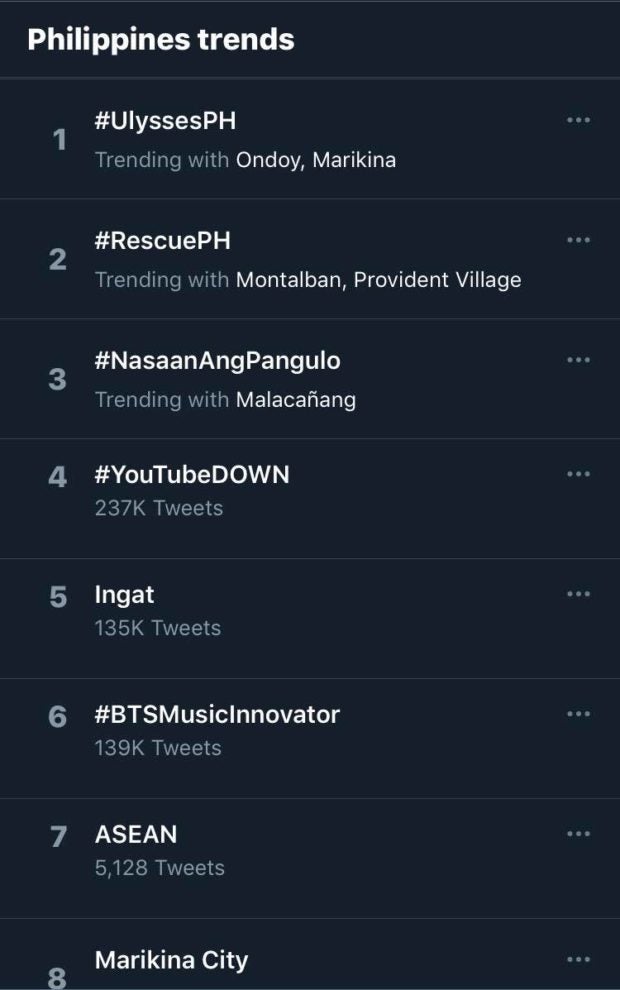 MANILA, Philippines — The perennial topic #NasaanAngPangulo (Where is the President) trended once again on social media as netizens looked for President Rodrigo Duterte during the onslaught of Typhoon Ulysses in parts of Luzon.

#NasaanAngPangulo tweets came about after Duterte virtually attended the opening ceremony of the 37th ASEAN Summit on Thursday morning.

As of writing time, #NasaanAngPangulo has almost 9,000 tweets.

The hashtag first became a trending topic online earlier this month after the President missed the first high-level public briefing on Super Typhoon Rolly, said to be the world’s strongest storm this year.

Typhoon Ulysses has already made three landfalls in the province of Quezon. The first was in the municipality of Patnanungan, at 10:30 p.m. Wednesday, the second was in the vicinity of Burdeos, at 11:20 p.m., and the third was in General Nakar, Quezon, at 1:40 a.m.

The weather state bureau said the typhoon has already weakened but Tropical Cyclone Wind Signal No. 3, however,  is still up over parts of Luzon including Metro Manila.

The onslaught of Typhoon Ulysses brought back memories of Ondoy, which caused severe flooding in Metro Manila and other parts of Luzon in September 2009.