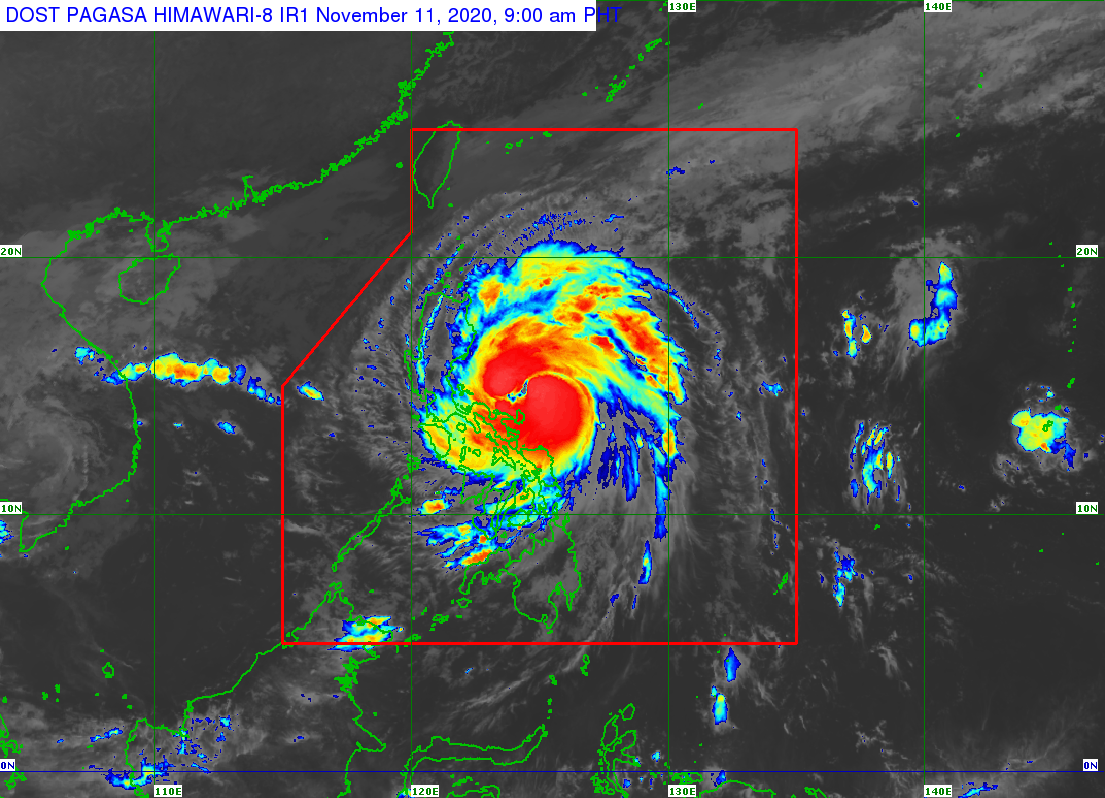 MANILA, Philippines — There is a “high risk” of storm surges of up to 3 meters in the coastal areas of Quezon including Polillo Islands, Camarines Norte, Catanduanes, and the northern and eastern coastal areas of Camarines Sur due to severe tropical storm Ulysses, the state weather bureau warned Wednesday morning.

According to the severe weather bulletin issued by the Philippine Atmospheric, Geophysical, and Astronomical Services Administration (Pagasa) at 8 a.m., storm surges of up to 2 meters may also occur in the coastal areas of Aurora, Bataan, Pampanga, Bulacan, Metro Manila, Cavite, Batangas, the northern portions of Mindoro Provinces including Lubang Island, Marinduque, Romblon, Masbate including Ticao and Burias Islands, Albay, and Sorsogon, and the remaining coastal areas of Camarines Sur.

“These storm surges, which may be accompanied by swells and/or breaking waves near the coast, can cause life-threatening and damaging coastal inundation. Moreover, there is also a moderate risk of seiche or storm surge over the coastal areas surrounding Laguna de Bay,” Pagasa said.

A storm surge is the “abnormal rise in sea level that occurs during tropical cyclones,” according to the weather bureau. It is caused by strong winds and low atmospheric pressures produced by tropical cyclones.

Pagasa said that in the next 24 hours, rough to very high seas (2.5 to 10 meters) will be experienced in the seaboards of areas under Tropical Cyclone Wind Signals (TCWS) and the eastern seaboard of Eastern Samar currently not under TCWS No. 1. TCWS are currently raised in parts of Luzon, including Metro Manila, and parts of the Visayas.

“Sea travel is risky for all types of seacrafts over these waters,” Pagasa said.

“Mariners of small seacrafts are advised to take precautionary measures when venturing out to sea. Inexperienced mariners should avoid navigating in these conditions,” Pagasa added.

At 7 a.m., the center of Ulysses was spotted 135 kilometers north-northeast of Virac, Catanduanes or 350 km east of Infanta, Quezon. It is moving westward at 20 kph and has maximum sustained winds of 110 kph near the center and gustiness of up to 135 kph.

Pagasa said the weather disturbance may intensify into a typhoon within the next six to 12 hours and reach its peak intensity of 130 to 155 kph prior to landfall. The center of Ulysses is forecast to make landfall over Polillo Islands and mainland Quezon between this Wednesday night and Thursday early morning.

Ulysses may whip up storm surge in Manila, other coastal areas – NDRRMC

Signal No. 3 may be raised in NCR, Bicol region, other parts of Luzon due to ‘Ulysses’