Ulysses may whip up storm surge in Manila, other coastal areas – NDRRMC 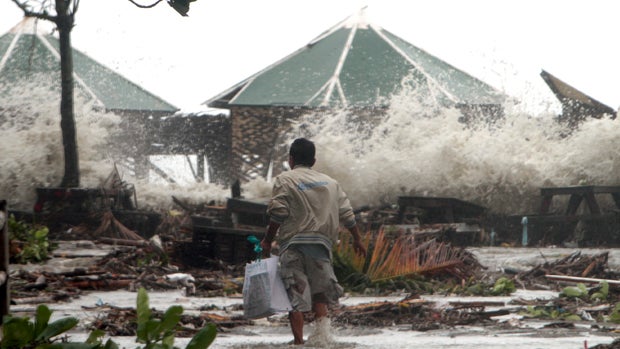 FILE – In this July 16, 2014 photo, a worker walks toward the cottages as storm surge passes through the seawall at the height of Supertyphoon Glenda in Noveleta, Cavite. EDWIN BACASMAS

MANILA, Philippines — The National Disaster Risk Reduction and Management Council (NDRRMC) on Tuesday warned that a storm surge may occur in the coastal areas in Manila and other Luzon areas due to Tropical Storm Ulysses (international name: Vamco).

What is storm surge?

According to the Philippine Atmospheric, Geophysical and Astronomical Services Administration (Pagasa), a storm surge is “the abnormal rise in sea level that occurs during tropical cyclones.”

“As the tropical cyclone approaches the coast, strong winds push the ocean water over the low-lying coastal areas, which can lead to flooding. This makes storm surges very dangerous,” the state weather bureau explained.

Pagasa said storm surge becomes more dangerous when it arrives on top of a high tide. When this happens, it may flood areas that otherwise might have been dry or safe. On top of the storm surge, big and strong waves generated by powerful winds also comes with it.

It considers several technical factors when predicting the negative impacts of a storm surge. For storm-surge prone communities, the most important considerations are:

• The strength of the Tropical Cyclone

• The height of the surge, and

• The community is located in the low-lying area

Expectedly, the only way to minimize the drastic effects of a storm surge is for community members to always check for weather updates, pro-actively prepare for things to come and, as needed, to evacuate to high ground when called for mandatory evacuation.

Based on Pagasa’s 11 a.m. severe weather bulletin, Ulysses was last spotted at 475 east of Virac, Catanduanes, and packed maximum sustained winds of 75 kilometers per hour (kph) near the center and gustiness of up to 90 kph.

Ulysses is expected to intensify to a severe tropical storm by Tuesday night and may reach the typhoon category by Wednesday morning.

Tropical Cyclone Wind Signal No. 1 is raised over 10 areas due to Ulysses. [ac]