TRIBAL PRIDE Performers representing Ati tribes compete in the street dancing competition in the 2019 staging of Dinagyang Festival in Iloilo City. Next year, the celebration of Iloilo’s biggest tourist drawer will be subdued due to health and safety precautions as the country deals with the COVID-19 pandemic. —NESTOR P. BURGOS JR.

CEBU CITY, Cebu, Philippines — Three major festivals in the Visayas — Cebu’s Sinulog, Iloilo’s Dinagyang and Aklan’s Ati-Atihan — will still push through in January 2021 amid the raging COVID-19 pandemic, but organizers promised to tone down the annual celebrations to avoid another surge of infections in local communities.

Sinulog dance rituals and performances by Cebu City-based contingents will be streamed live, while out-of-town performers, including those from Cebu province, will have to prerecord their performances, said Elmer Labella, executive director of Sinulog Foundation Inc.

Vice Mayor Michael Rama, who was tasked with leading the preparations for Sinulog 2021, said the number of dancers per contingent would be limited to only 50. The use of backdrops and rolling props during performances will also be prohibited. There will be no floats and “higantes” (effigies).

The priests at Basilica Minore del Sto. Niño will forgo religious activities related to the 456th Fiesta Señor, except for novena Masses, as a precaution against the spread of COVID-19.

Both Sinulog and Ati-Atihan are held every third Sunday of January, followed by the Dinagyang, a week later, in honor of the Sto. Niño, or Child Jesus.

As top tourist events, festivals bring in revenues and livelihood for hotels, restaurants, transport companies, and souvenir and food vendors.

Continued travel restrictions, community quarantine measures and concerns over the pandemic, however, were expected to limit the participation of tourists and revelers.

In Iloilo, organizers of the Dinagyang Festival were preparing streamlined celebrations, too, far from the usual festivities packed by thousands of devotees.“It will be a balance of health and our economy. But safety will come first,” lawyer Jobert Peñaflorida, president of the Iloilo Festivals Foundation Inc. (Iffi), told the Inquirer.Iffi, a private organization of business operators and owners, organizes and manages various festivals in the city. 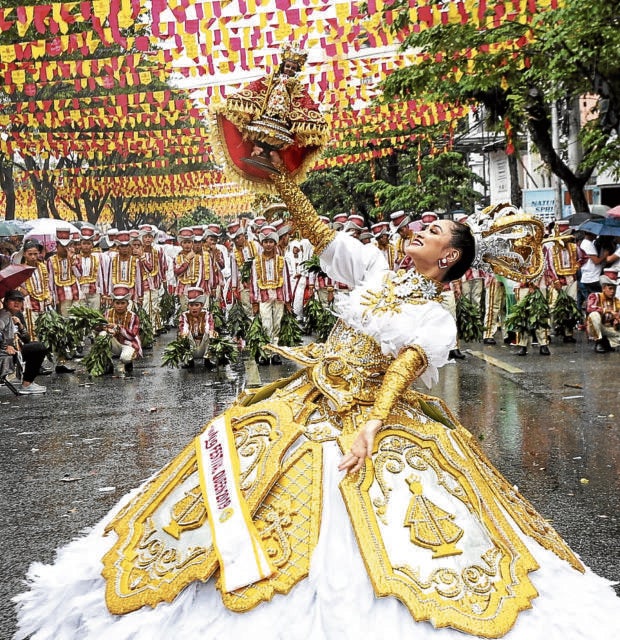 “We are looking at a celebration that is more virtual and based on social media platforms,” said Peñaflorida, noting that the foundation’s recommendations on the holding of Dinagyang were firmed up during consultations with representatives of different sectors.While Ati tribe performances had not been ruled out, Peñaflorida said the celebration next year would be different. In previous years, groups performed along a carousel-type parade packed with spectators in judging areas and along the main streets of Iloilo City.

“The bottom line is [this is] not [about] the dancing but honoring the Sto. Niño,” he said.

There would be a Mass on the final day of the Kalibo Ati-Atihan on the third week of January.But Kalibo Mayor Emerson Lachica said the foot procession, one of the festival highlights, would be scrapped. Carriages bearing images of saints would instead be followed by a few vehicles passing through the main streets before ending at St. John the Baptist Cathedral.The street dancing would most likely be called off to avoid gathering of crowds as a precaution against the spread of COVID-19.

The Kalibo Ati-Atihan is considered the oldest among the festivals in honor of Sto. Niño. It is known for its unique and spontaneous “sadsad” (street dancing) to the beat of drums and the melodic tune of lyres. INQ