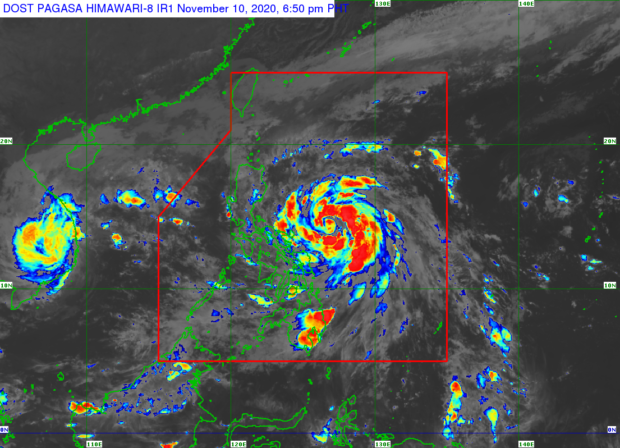 MANILA, Philippines — Tropical Storm Ulysses could likely cause flash floods, landslides, and lahar – which is a violent type of mudflow, the country’s weather bureau warned Tuesday.

In its weather update, the Philippine Atmospheric, Geophysical and Astronomical Services Administration (Pagasa) said these potentially dangerous events may be possible as Ulysses may intensify into a typhoon prior to landfall.

Pagasa said Ulysses may hit Quezon province in the Calabarzon Region, but has not ruled out a probability that it would slightly swerve southward that the Bicol Region may be hit yet again. Bicol and Calabarzon regions have just been slammed by Super Typhoon Rolly as well as Typhoon Quinta.

Pagasa also mentioned Albay in its warning since a lahar event occurred in the province when Rolly pummelled the Bicol Region.

(Again, we are reminding people about the dangers of flash floods, landslides, and in the case of Albay the flow of lahar due to the past cyclones Quinta and Rolly, which brought considerable amounts of rainfall over Bicol and Calabarzon.)

(If heavy rainfall prevails, we are advising residents to take precautionary measures, and abide by the local governments’ instruction for evacuation as they have already identified high-risk areas for flooding and landslides.)

Rolly’s winds and heavy rain pushed down mud and rocks from the Mayon Volcano in Albay, inundating crops and communities. According to Vice President Leni Robredo, who visited the affected areas in Albay, the lahar used a rare stream that was not seen since the 1960s, taking people by surprise.

Robredo also said that some parts of Albay may already be uninhabitable as big rocks and mud buried houses and other properties.

READ: Some areas in Albay may be uninhabitable after lahar flow, says Robredo

Eight cyclones have already entered the Philippine area of responsibility (PAR) in a month —from October 11 to November 10: Nika, Ofel, Pepito, Quinta, Rolly, Siony, Tonyo, Ulysses. Except for Nika, all cyclones hit the country’s landmass.

And like Ulysses, majority of the storms’ paths covered the eastern portion of the country: Eastern Visayas, Bicol Region, eastern parts of Quezon, and Cagayan Valley.