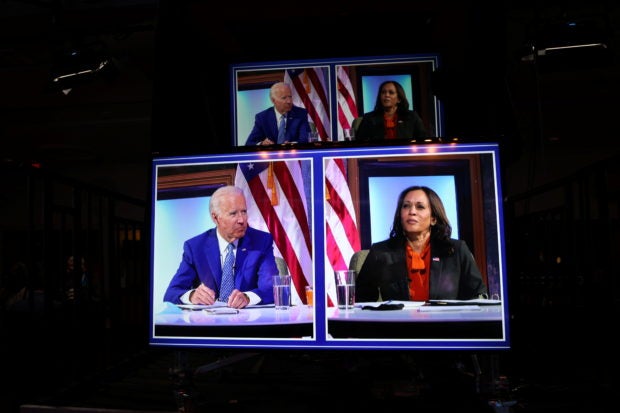 WILMINGTON — President-elect Joe Biden hailed Pfizer Inc’s progress toward a COVID-19 vaccine on Monday but urged Americans to wear masks because it may not be widely available for many months, as President Donald Trump’s administration tried to claim credit.

Pfizer said its experimental COVID-19 vaccine was more than 90% effective as it disclosed the first successful interim data from a large-scale clinical test. That was major progress in the quest for a vaccine to combat a pandemic that has killed more than 237,000 Americans, thrown millions more out of work and contributed to Trump’s defeat in last Tuesday’s election.

The drugmaker developed its vaccine outside of the White House’s Operation Warp Speed program, although the U.S. government placed an initial order in July for 100 million Pfizer COVID-19 vaccine doses for $1.95 billion and can acquire up to 500 million additional doses. Operation Warp Speed pumped billions of dollars into six other pharmaceutical companies intended to accelerate development of a COVID-19 vaccine.

Pfizer also was one of a number of companies to be part of a public-private partnership launched by the U.S. National Institutes of Health in April to speed COVID-19 vaccine and treatment options.

Biden, who said his advisers had been told of the breakthrough on Sunday night, in a statement called Pfizer’s announcement “great news” but said it would be “many more months” before widespread vaccination is available in the United States.

“As we work toward a safe and effective vaccine, we know the single most effective thing we can do to stop the spread of COVID is wear a mask,” Biden, who made his criticism of Trump’s handling of the pandemic a centerpiece of his campaign, told reporters in Wilmington, Delaware.

The United States has been registering record-high infection numbers in recent days. Mask wearing has become a political issue in the United States, with Trump mocking Biden for wearing a mask during the campaign and many conservatives contending masks infringe on their individual freedom.

Biden spoke two days after clinching election victory over Trump, who has not conceded defeat and is pursuing legal challenges to the results while making unsubstantiated claims of fraud.

“They all knew it but kept it from the public on purpose,” Trump Jr. said on Twitter. “Big Pharma hates Trump for taking on the gouging of Americans with drug pricing while offering the same drugs elsewhere in the world for pennies in the dollar.”

Pfizer and German partner BioNTech SE were the first drugmakers to release successful data from a large-scale clinical trial of a vaccine for the novel coronavirus.

“We can save tens of thousands of lives if everyone would just wear a mask for the next few months. Not Democratic or Republican lives. American lives,” Biden said, adding that “it won’t be forever.”

“So please, I implore you: Wear a mask. Do it for yourself. Do it for your neighbor. A mask is not a political statement, but it is a good way to start pulling the country together,” Biden added.

Biden during the campaign accused Trump of panicking and surrendering to the pandemic. Trump promoted unproven medicines, assailed public health experts, failed to signal empathy or compassion as the death toll mounted and disregarded advice on mask wearing and social distancing, ending up hospitalized in October receiving treatments for COVID-19.

Biden cleared the threshold of 270 Electoral College votes needed to win the presidency on Saturday after four days of ballot counting.

“This election is over,” Biden told reporters. “It’s time to put aside the partisanship and the rhetoric that is designed to demonize one another.”

But senior Republican lawmakers continued to refuse to recognize Biden as the election winner. Senate Majority Leader Mitch McConnell said on Monday that Trump was fully within his rights to look into alleged voting irregularities, and in a Senate speech did not acknowledge Biden as president-elect.

Trump, apparently intent on settling scores within his administration in the aftermath of the election, announced on Twitter on Monday he had “terminated” Defense Secretary Mark Esper.

Trump has been talking with his advisers about possibly running for president in 2024, a source familiar with the discussions said.

Trump campaign manager Bill Stepien held an all-staff meeting at campaign headquarters to give the message that Trump was “still in this fight,” a source familiar with the meeting said.