Where the key states stand in tight US election | Inquirer News

Where the key states stand in tight US election 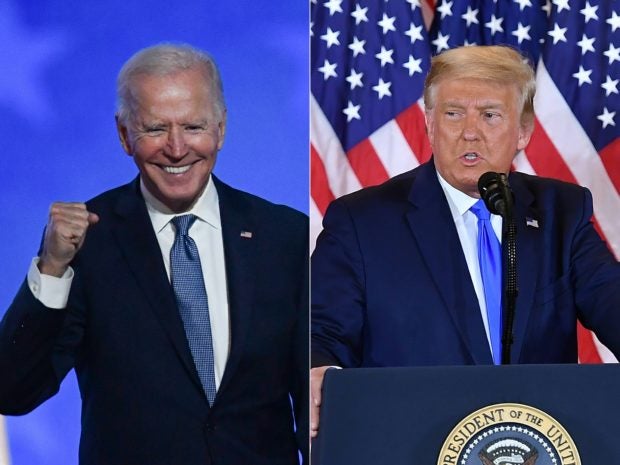 (COMBO) This combination of pictures created on November 4, 2020 shows Democratic presidential nominee Joe Biden gestures after speaking during election night at the Chase Center in Wilmington, Delaware, and US President Donald Trump speaks during election night in the East Room of the White House in Washington, DC, early on November 4, 2020. – President Donald Trump and Democratic challenger Joe Biden are battling it out for the White House, with polls closed across the United States Tuesday — and a long night of waiting for results in key battlegrounds on the cards. (Photos by ANGELA WEISS and MANDEL NGAN / AFP)

WASHINGTON, United States –  The result of the US presidential election is hanging on the vote count in a handful of key states, with the race too close to call so far.

Democrat Joe Biden has multiple paths paths to victory with his 264 electoral votes — including Michigan and Wisconsin — compared to 214 for President Donald Trump, who would need to take all the remaining states.

In order to win, 270 electoral votes are required. Those votes are divided up proportionately among the states.

As it stands, there are five states still left uncalled, including major prizes such as Pennsylvania and key small state Nevada, as well as Georgia, North Carolina and Alaska.

Much of the delay has resulted from a flood of mailed-in ballots due to the coronavirus — and those types of votes have tended to favor Democrats.

The paths to victory become more murky should some of the expected outcomes change.

Here is a summary of the situation:

If Biden takes Nevada, it could be all over.

The Democrat is expected to win Nevada’s six electoral votes, but the Western state that is home to gambling mecca Las Vegas remains too close to call.

State officials said Wednesday that further results would not be known until Thursday.

Perhaps the state that could take the longest to declare a winner — and one that could potentially decide the outcome with 20 electoral votes at stake.

With 86 percent of the vote counted in the industrial Rust Belt state, Trump was ahead with 51.4 percent compared to Biden’s 47.3 — but the president’s lead was shrinking as the vote counting continues.

Remaining ballots are expected to favor Biden, who was born in the state.

Much to Trump’s chagrin, Pennsylvania has decided to allow mailed ballots sent by Election Day but received up to three days afterward to be counted due to coronavirus complications. Authorities expect to complete the count by Friday.

But on Wednesday Trump’s campaign said it was suing to halt the count, accusing electoral officials of prohibiting its “observers” from approaching closer to 25 feet (7.6 meters) to vote counters.

Trump appeared favored to win North Carolina’s 15 electoral votes despite a strong showing by Biden, but it remained too close to call.

With 95 percent counted in the southeastern state, Trump had 50.1 percent and Biden 48.6.

Mail ballots sent on or before election day can be counted until November 12.

Biden performed unexpectedly well in the southeastern state that is traditionally a Republican stronghold, but Trump was still ahead — though his lead was narrowing. The state has 16 electoral votes.

With 94 percent counted, Trump had 50 percent compared to 48.8 for Biden. US media were expecting an extraordinarily close race.

A final result was expected Wednesday or early Thursday.