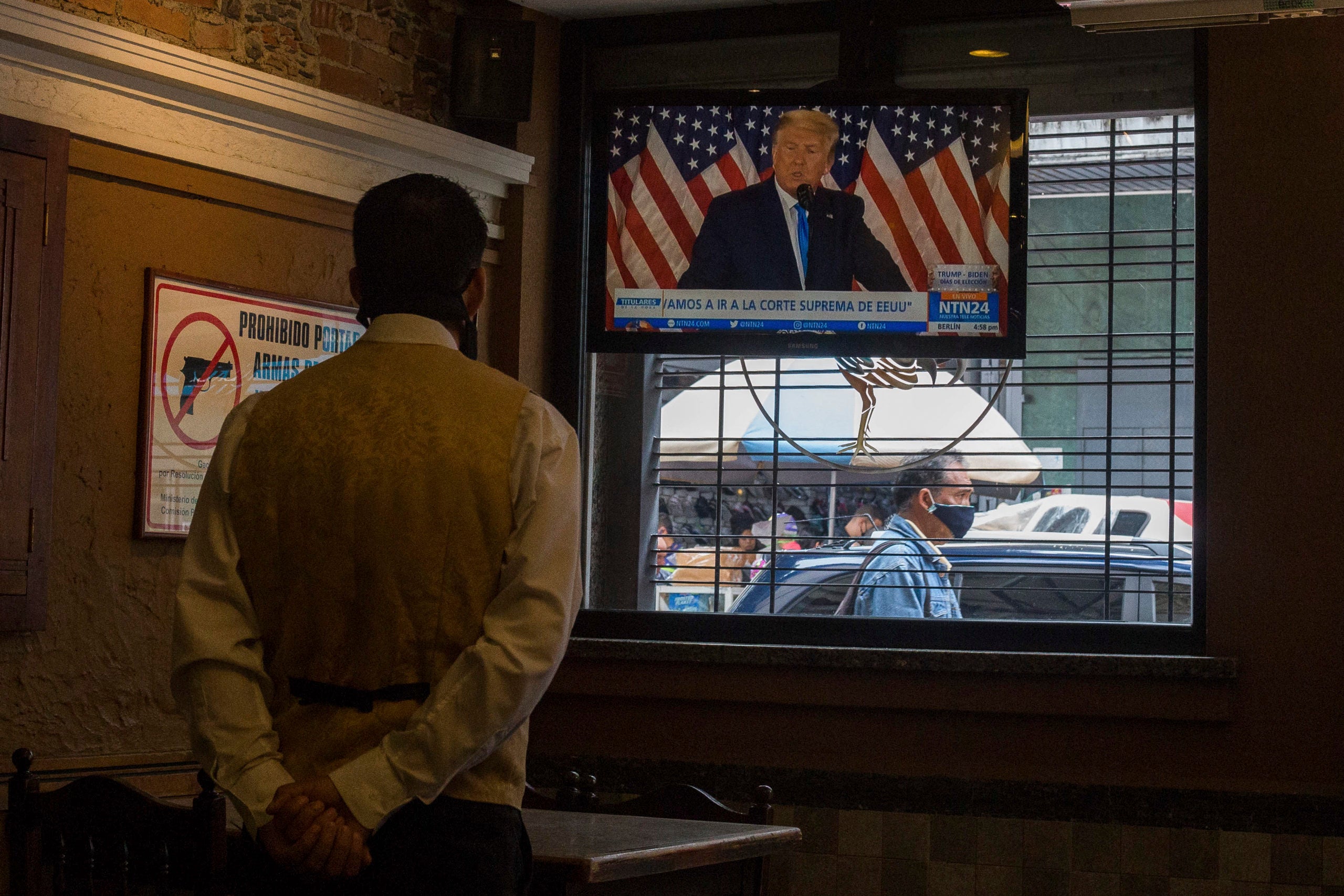 U.S. President Donald Trump is displayed on a television screen at a restaurant in Caracas, Venezuela, on November 4, 2020, amid the COVID-19 coronavirus pandemic. (Photo by Cristian Hernandez / AFP)

WASHINGTON — Democrat Joe Biden took a huge step Wednesday to capturing the White House, with wins in Michigan and Wisconsin bringing him close to a majority, but President Donald Trump responded with fury as his campaign sued to suspend vote counting.

In a brief address on national television, flanked by American flags and his vice presidential pick Kamala Harris, Biden said he wasn’t yet declaring victory, but that “when the count is finished, we believe we will be the winners.”

By flipping the northern battlegrounds of Michigan and Wisconsin, Biden reached 264 electoral votes against 214 so far for Trump. By adding the six of Nevada, where he is narrowly ahead, or the larger prizes of hard-fought Georgia or Pennsylvania, Biden would hit the magic number of 270 needed to win the White House.

In stark contrast to Trump’s increasingly heated rhetoric about being cheated, Biden sought to project calm, reaching out to a nation torn by four years of polarizing leadership and traumatized by the Covid-19 pandemic, with new daily infections Wednesday close to hitting 100,000 for the first time.

“I know how deep and hard the opposing views are in our country on so many things,” Biden, 77, said.

“But I also know this as well: to make progress we have to stop treating our opponents as enemies. We are not enemies. What brings us together as Americans is so much stronger than anything that can tear us apart.”

American presidential elections are decided not by the popular vote but by securing a majority in the state-by-state Electoral College, which has 538 members.

U.S. media organizations called Michigan for Biden where he had a lead of some 120,000 votes. Earlier, Biden claimed Wisconsin, with a narrower but insurmountable lead.

The two states, along with Arizona — another that Biden was projected to flip — put the Democrat within arm’s reach of making Trump the first one-term president in 28 years.

However, Trump, 74, claimed victory unilaterally and made clear he would not accept the reported results, issuing unprecedented complaints — unsupported by any evidence — of fraud.

“The damage has already been done to the integrity of our system, and to the Presidential Election itself,” he tweeted, alleging without proof or explanation that “secretly dumped ballots” had been added in Michigan.

Trump’s campaign announced lawsuits in Michigan, Pennsylvania and Georgia and demanded a recount in Wisconsin.

In Michigan, the campaign filed a suit to halt vote tabulation, saying its “observers” were not allowed to watch at close distances.

In Detroit, a Democratic stronghold that is majority Black, a crowd of mostly-white Trump supporters chanted “Stop the count!” and tried to barge into an election office before being blocked by security.

The Trump campaign said it was also suing to halt the counting of votes in Pennsylvania — after the president called overnight for Supreme Court intervention to exclude the processing of mail-in ballots after the close of polls.

And it demanded a recount in Wisconsin, citing unspecified “irregularities.”

“This is the way they intend to win,” Giuliani told reporters in Pennsylvania’s largest city Philadelphia. “We’re not going to let them get away with it.”

Trump campaign manager Bill Stepien claimed they had won in Pennsylvania, despite the result still being calculated, and he rejected the call giving Biden a win in Arizona.

‘We have to be patient’

In a reversal of roles, the U.S. election brought statements of international concern, with German Defense Minister Annegret Kramp-Karrenbauer warning of a “very explosive situation” that could create a “constitutional crisis.”

An observer mission from the Organization for Security and Co-operation in Europe, which monitors votes around the West and former Soviet Union, found no evidence of election fraud and said that Trump’s “baseless allegations” eroded trust in democracy.

The most crucial — and messiest — contest may yet wind up being in Pennsylvania, where Trump’s lead had narrowed to 200,000 votes.

“We have to be patient,” said Tom Wolf, the Democratic governor of the state where Republican lawmakers had prevented millions of mail-in ballots from being counted before Election Day.

“They’re going to be counted accurately and they will be counted fully,” Wolf told reporters.

The race also tightened in Georgia, a state once seen as solidly Republican, where Trump was up by just under 40,000 votes.

That race, which hinged on a handful of votes in Florida, eventually ended up in the Supreme Court, which halted a recount while Bush was ahead.

The US Elections Project estimated total turnout at a record 160 million including more than 101.1 million early voters, 65.2 million of whom cast ballots by mail amid the pandemic.