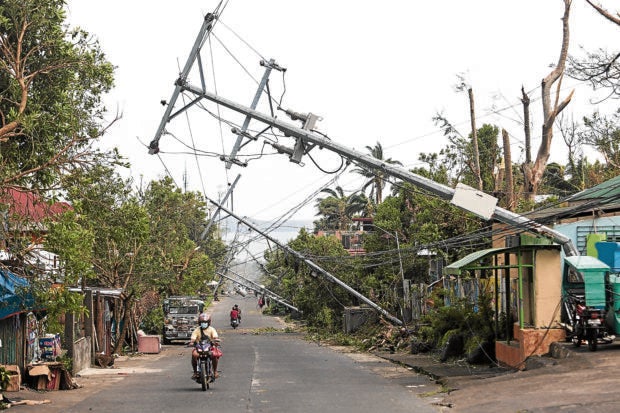 LEGAZPI CITY — With the severe damage in the primary lines and facilities after Super Typhoon “Rolly” (international name: Goni) pounded Albay province, the restoration of power could take up to two months, Albay Power and Energy Corporation (Apec) said.

At least 77 percent of the electric poles in the entire province were severely damaged.

He said some parts of the second district of the province might be energized earlier since the damage were not as severe as the two other districts.

“It will also depend on the availability of the National Grid Corporation of the Philippines Daraga 69 kV Transmission Lines. We need to ensure our lines and facilities are repaired and safe,” he said.

The assessment team were unable to check the impact in some towns due to impassable roads.

Capus said they coordinated with some local service contractors to help them in the line clearing, repairs and other troubleshooting concerns.

Ten augmentation teams from other electric cooperatives and distribution utilities in the country will also help restore power supply in the province, Capus said.

They are also appealing to the communities to help them in clearing the utility poles with debris and trunks of trees felled by the typhoon.

Read Next
PH to have partly cloudy to cloudy skies, isolated rains as ‘Rolly’ nears exit
EDITORS' PICK
In good spirits: SMDC helps farmers and residents through Kadiwa Market
Smart three-peats as country’s fastest mobile network – Ookla
Pre-order the new vivo Y20s [G] to get a free TWS earphone
DSWD chief admits ‘slow start’ in distribution of aid in ‘NCR Plus’
Would the military allow me to stay this long if I’m inutile? – Duterte
65% of Filipinos say Duterte’s health should be made public – SWS
MOST READ
Vico Sotto frets getting photos of ‘butt vaccination’ from Pasig dwellers
Metro Manila to have shortened curfew hours from 8 p.m. to 5 a.m. under MECQ
San Miguel Corp. continues to invest heavily in the Philippines’ future
COVID-hit Roque slams ‘un-Christian’ query on how fast he secured hospital bed
Don't miss out on the latest news and information.