Rolly now a super typhoon, Signal No. 5 to be raised over parts of Bicol | Inquirer News
Close
menu
search 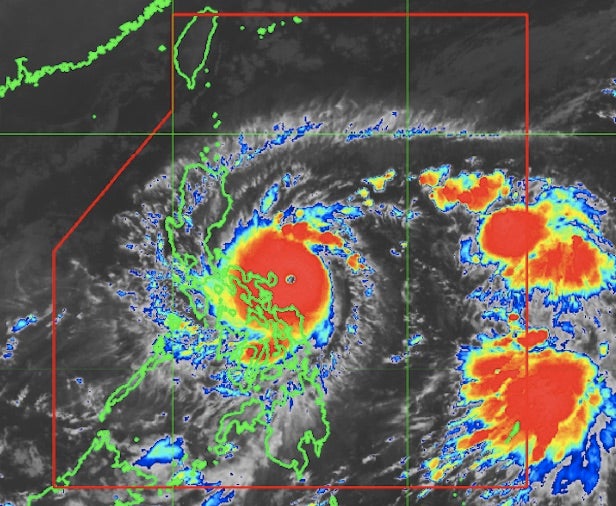 MANILA, Philippines — Typhoon Rolly (international name: Goni), the strongest typhoon in the world so far in 2020, intensified further to a super typhoon early Sunday, according to the Philippine Atmospheric, Geophysical and Astronomical Services Administration (Pagasa).

Because of this PAGASA warned that Tropical Cyclone Wind Signal (TCWS) No. 5 will be raised over Catanduanes, Eastern Camarines Sur, and Albay.

“Catastrophic wind damage is expected,” Pagasa said in a tweet.

Under Pagasa’s public storm warning signal, TCWS No. 5 means that winds of more than 220 kilometers per hour (kph) is expected in at least 12 hours, and a storm surge of more than 3 meters is possible at coastal areas.

At 2:00 AM today, Typhoon #RollyPH intensified into a Super Typhoon. TCWS #5 will be raised over Catanduanes, Eastern Camarines Sur, and Albay. Catastrophic wind damage is expected. pic.twitter.com/pj2uwT5hZe

Meanwhile, Signal No. 3 is raised over:

the rest of Albay

the rest of Quezon including Polillo Islands

Signal No. 2 is hoisted over:

the rest of Masbate

the rest of Romblon

the rest of Oriental Mindoro

the rest of Occidental Mindoro including Lubang Island

the rest of Bulacan

the southern portion of Quirino (Nagtipunan)

And Signal No. 1 is raised over:

the rest of Quirino

the rest of Nueva Vizcaya

the southern portion of Apayao (Conner)

the rest of Aurora

the rest of the northern portion of Antique (Sebaste, Culasi)

the rest of Aklan

the rest of Samar

the rest of Eastern Samar

In its 2 a.m. severe weather bulletin, Pagasa warned that violent winds and intense to torrential rainfall will be experienced over Catanduanes, Camarines Norte, Camarines Sur, Albay, and the southern portion of Quezon.

“This a particularly dangerous situation for these areas,” Pagasa said.

The eye of Rolly is forecast to make landfall at its current peak intensity over Catanduanes early Sunday morning and over Camarines Sur Sunday morning.

Moving west-southwestward at 25 kph,it was packing maximum sustained winds of 215 kph near the center with a gustiness reaching up to 265 kph.

Moderate to heavy rains with at times intense rains will fall over the Cordillera Administrative Region, Leyte, and the rest of mainland Cagayan Valley and Central Luzon.

It will bring light to moderate with at times heavy rains over Caraga, Northern Mindanao, Zamboanga Peninsula, and the rest of Luzon and Visayas.

The tropical depression has maximum sustained winds of 55 kph near the center with a gustiness reaching up to 70 kph. It was moving west-northwest at 20 kph.

Atsani is expected to enter the Philippine area of responsibility Sunday afternoon. It will be given the local name Siony when it enters PAR.

Atsani remains less likely to affect any portion of the country over the next two to three days, Pagasa said. However, it likely to reintensify into a tropical storm in the next 12 to 24 hours.