For Alcoy town in Cebu, dolomite is life | Inquirer News

ALCOY, Cebu, Philippines — It was during his fishing trips five years ago that Jeffrey Dueñas first noticed that some corals in waters about a kilometer away from a dolomite quarry site in Barangay Pugalo here were covered with a white powdery substance.

He ignored the unusual sight even if it affected a fairly large area, covering about 5,000 square meters, or half a hectare. “We did not mind it because our catch wasn’t affected that much,” he said.

Now that the damage has spread and covered about 2.5 hectares, Dueñas, who gets about 3 kilograms of fish a day that he sells for P300, only wishes that his catch will not further dwindle so he can feed his family.

The seeming lack of concern shown by Dueñas reflects the general sentiment of local residents on environmental issues raised against the quarrying of dolomite rocks to beautify a portion of Manila Bay.

Dolomite, a sedimentary carbonate rock, is generally used as an auxiliary material for iron and steel; sintering agent and flux in metal processing; ingredient in the production of glass, bricks and ceramics; utilized as fertilizer and soil conditioner; and feed additives for livestock, among others.

Only a few have reacted to the discovery of the Provincial Environment and Natural Resources Office that corals in the waters of Pugalo were destroyed due to heavy siltation caused by crushed dolomite that spilled into the sea while being loaded on a conveyor belt into a bulk carrier.

But many were saddened when Environment Secretary Roy Cimatu ordered on Sept. 25 the suspension of the entire operations of the two mining firms pending an investigation conducted by his department. 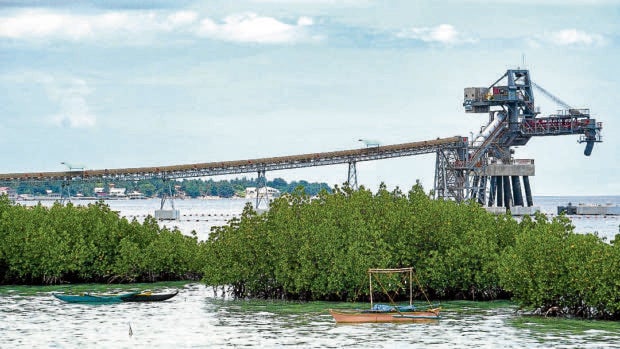 ‘WHITE SAND’ TRANSPORT A conveyor belt transfers crushed dolomite rocks from a quarry site in Alcoy, Cebu, to a bulk carrier. An inspection by the Provincial Environment and Natural Resources Office in September showed that corals covering about 2.5 hectares in Barangay Pugalo were destroyed due to heavy siltation caused by crushed dolomite spilling into the sea as these were prepared for transport. —NESTLE SEMILLA

It is not at all surprising because Dolomite Mining Corp. (DMC) and its sister company, Philippine Mining Service Corp. (PMSC), are the lone industries in Alcoy which have provided jobs to at least 300 residents.

Their operations also filled the coffers of not only the municipal government but also the barangay.

“They (DMC and PMSC) have been here since 1981. There may be lapses in their operations, but these produced minor effects to the people and the environment,” said Ronelo Debulosan, Pugalo village chief.

“To be honest, residents here are sad after the extraction of dolomite in our place was halted because our barangay’s development largely depends on them (DMC and PMSC). For one, our collaboration with the company led to the concreting of roads and other projects,” he added.

Alcoy, located 93 kilometers south of Cebu City, is a fifth-class municipality (annual income: not less than P25 million) with a population of 16,979 spread in eight villages based on the 2015 census.

Most of them rely on fishing, agriculture and backyard farming.

But the town has been blessed with rich natural resources. It hosts a 1,600-ha natural forest in Barangay Nug-as, the biggest among eight forested areas on Cebu Island, which has been the home to the endangered songbird locally known as “siloy,” or black shama (Copsychus cebuensis), as well as endemic plant species like cinnamon, blueberry and mistletoe.

Siloy population here in 2016 was pegged at 3,300, according to the International Union for Conservation of Nature.

But its number continued to decline due to rampant forest clearing by slash-and-burn farmers and illegal loggers. 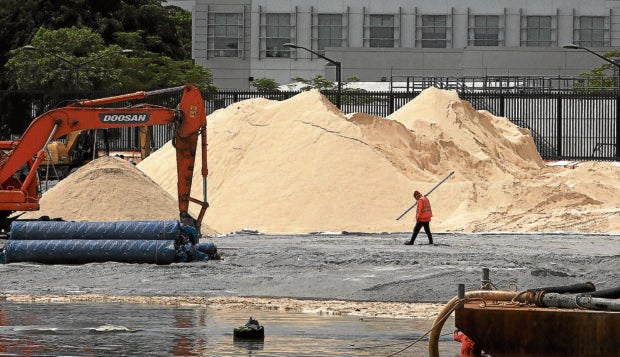 MANILA BAY ATTRACTION Mounds of crushed dolomite from Cebu await to be leveled along a section of Manila Bay for the government’s beach nourishment project in this photo taken in September. The area covered by “white sand” was an instant attraction during its opening, but portions of the beach had since been washed out. —MARIANNE BERMUDEZ

About 15 km from the Nug-as forest lies a large deposit of dolomite rocks.

Barangay Pugalo is one of the areas in the country where “economically extractable,” or minable, deposits of dolomite can be found.

According to a report from the Cebu provincial government, dolomite has been mined here for the last 40 years and exported to Japan and Korea as raw material for the manufacture of steel and glass.

Alcoy is also the source of the crushed dolomite rocks used to transform a portion of Manila Bay—a move that was criticized by environmentalists as “ill-timed” since the P389-million project was done at a time when the country was grappling with a pandemic.

The rocks were shipped by DMC and PMSC, which have the mining claims to the 571 ha of dolomite deposits in Pugalo.

The town has tried to capitalize on its 20 pristine beaches and the Nug-as forest through bird-watching activities to generate income. But ecotourism activities have been slow, said Mayor Michael Angelo Sestoso.

Most tourists also prefer to head straight to the beach instead of going to Nug-as, about 4 km from the town center.

Alcoy’s annual income of about P300,000 a year from ecotourism activities is a drop in the bucket as it gets close to P5 million in annual taxes from mining companies and another P1.3 million in shares from the national government.

The Mines and Geosciences Bureau (MGB) said DMC had just been given another 25-year mineral production service agreement (MPSA) that will expire in 2030.

The raw dolomite quarried by DMC is delivered to its sole buyer, PMSC, for processing to desired sizes and marketable products.

PMSC-Alcoy Plant holds a mineral processing permit by the MGB, which will expire in 2023. 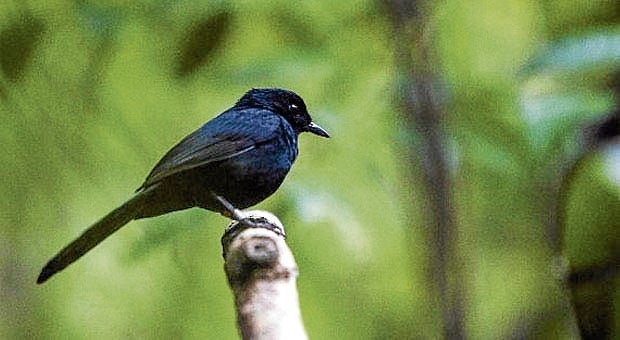 DMC’s MPSA only covers mining activities for the purpose of exporting dolomite to Japan and Korea for glass manufacturing. But PMSC began supplying dolomite as a substitute for sand and gravel locally.

By supplying the domestic market, DMC faces the possibility of going over the estimated volume it was allowed to extract, posing a great threat to the environment.

On Sept. 8, Cebu Gov. Gwendolyn Garcia disallowed the further extraction, selling and transport of dolomite locally beyond the MPSA provisions.

She said dolomite in Alcoy was sold as a substitute for sand and gravel in the domestic market without securing the necessary permits from the provincial capitol and paying the corresponding local taxes.

She said she did not want a repeat of the massive landslide near a quarry site in the City of Naga in southern Cebu where 78 people died and many rendered homeless in September 2018. 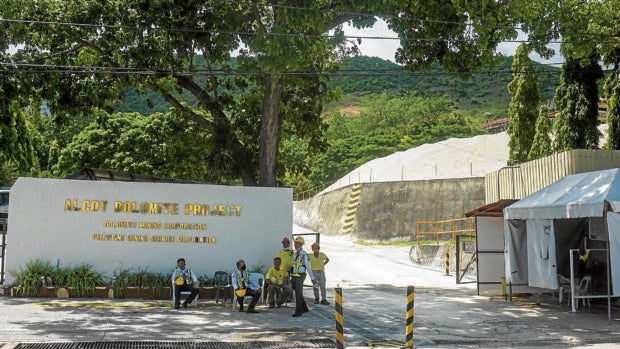 The Inquirer visited the mine site in Pugalo on Oct. 4 but was barred entry by personnel of the mining companies.

In an earlier statement, Antonio Castillo, the senior manager for corporate planning of PMSC, said the company would cooperate with the government and would heed whatever directive given to them. “We could not say no to their order because they are the regulating body,” he said.

But according to Pugalo village chief Debulosan, local officials and personnel of the Philippine Institute of Volcanology and Seismology have been monitoring dolomite quarrying here to make sure the mine site is stable.

“If ever there are landslides, that did not come from the mining site. As to reports that the dolomite destroyed the corals, our fishermen never had a zero catch. Maybe, there were times when they caught a few but they never said they caught nothing,” he said.

Debulosan expressed hopes that the mining companies would be allowed to resume operations. “May they (government and mining sites) find a win-win solution to this issue otherwise it will trickle down to the people here,” he said.

Camila Requinto, 32, a store vendor near the dolomite quarry site, said she was thankful to the mining firms for providing jobs to many residents.

“Not allowing DMC and PMSC to continue their operations will surely affect people here,” said Requinto, stressing that her husband’s job at DMC enabled them to send their daughter to college.

“To be candid, the quarrying of dolomite has never affected the environment and the people of Alcoy. But now that it ceased operations, where will we get food for our family? What will happen to us?” Requinto asked.