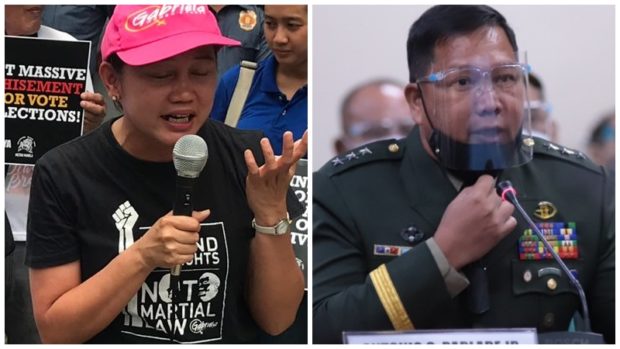 MANILA, Philippines — Armed Forces of the Philippines (AFP) Southern Luzon Command chief Lt. Gen. Antonio Parlade Jr. is nothing but a “publicly-funded Halloween mascot” for trying to “scare off” women’s rights advocates amid alleged red-tagging of some lawmakers and celebrities.

Gabriela Party-list Rep. Arlene Brosas, whose organization was labeled by Parlade as “part of a terrorist organization,” said in an online press briefing Friday that it is Parlade who is acting like a “terrorist” by scaring off those who are only looking after the welfare of others.

“Parlade is a publicly-funded Halloween mascot for repeatedly scaring off and threatening women’s rights advocates,” said Brosas, who claimed to have also been red-tagged by the military official.

Brosas claimed that actress Angel Locsin and her sister Ella Colmenares — two of several women warned off by Parlade — have been known for helping others in times of natural disasters.

Parlade, a member of the National Task Force to End Local Communist Armed Insurgency (NTF-ELCAC), a group created by President Duterte to stamp out insurgency in the barangay level, earlier claimed that Colmenares is involved in communist groups.

He likewise claimed that Locsin was aware of her sister’s alleged involvement in these underground activities.

Brosas renewed her call to scrap NTF-ELCAC’s budget and instead give additional funds to other social services and public hospitals.

Likewise ACT Teachers Partylist Rep. France Castro said the government’s red-tagging of individuals is being used to distract the public from the issues of corruption under the Duterte administration.

In an interview with ABS-CBN’s “Teleradyo,” Parlade admitted that the Makabayan bloc lawmakers were under surveillance for their alleged ties with the Communist Party of the Philippines (CPP) and the New People’s Army (NPA).

“We may not agree with them on certain issues, but be mindful that these lawmakers are duly elected representatives of the people, and implicating them on issues that have yet to be substantiated is uncalled for,” Velasco said.

Read Next
PNP to ‘maximize’ deployment to respond in preparation for ‘Rolly’
EDITORS' PICK
Smart celebrates all kinds of ‘#SimplyLove’ for Pride Month
Duterte to issue memo on face shields this week
Smart brings KCON:TACT especially 4U to subscribers from June 19 to 27
Gilas out to prove Korea win not a fluke; Tab fires back at ‘lucky shot’ remark
DOH reports 40 more COVID-19 variant cases
Young, Huerter help Hawks upset top seed Sixers in Game 7
MOST READ
Duterte to issue memo on face shields this week
No plot to oust Pacquiao as PDP-Laban president in July meeting — Nograles
Probe troll farms, lawmakers urge
Año: Drug war to be effective no matter who next leaders are
Don't miss out on the latest news and information.