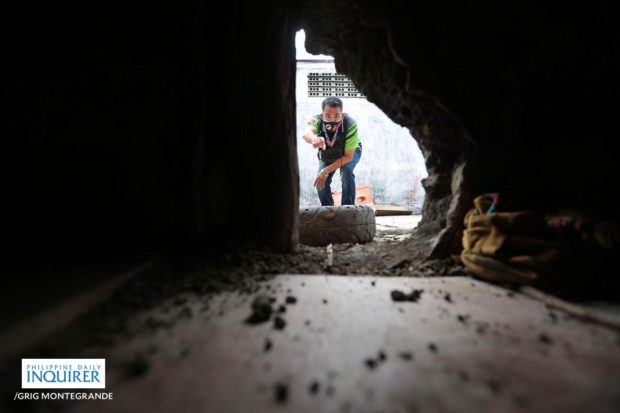 A Caloocan City Hall personnel points to the hole which the 15 detainees carved and crawled out to escape detention from the Caloocan City Police Station’s temporary detention facility last Oct. 22. The escapees all tested positive for CoVid19 in rapid antibody tests. The detainees are facing charges of illegal drugs and possession of illegal firearms. -INQUIRER/GRIG C. MONTEGRANDE

When sought for clarification about the reason behind Menor’s relief, Sinas said: “I surmised baka dahil dito sa nakatakas. (I surmised maybe because of the escapees).”

Last week, Caloocan police reported that 15 detainees bolted the Custodial Facility Unit Extension of Caloocan City Hall through a hole that they made on the cell wall.

Ylagan identified those who are still at large as: Martin Mama; Gerry Mar Patilla; Raymond Balasa; and Norberto Alvarez. The escapees were arrested for drug, robbery, and theft cases.

In the investigation, Sinas said the NCRPO is also conducting a further probe into the culpability and command responsibility of the police officers in the jailbreak.

“As to the relief of Menor, it is initiated by Camp Crame so we just followed and implemented the directive but the investigation tuloy pa rin iyon para to determine yung culpabiility ng mga officers involved in Caloocan City police station,” he said.