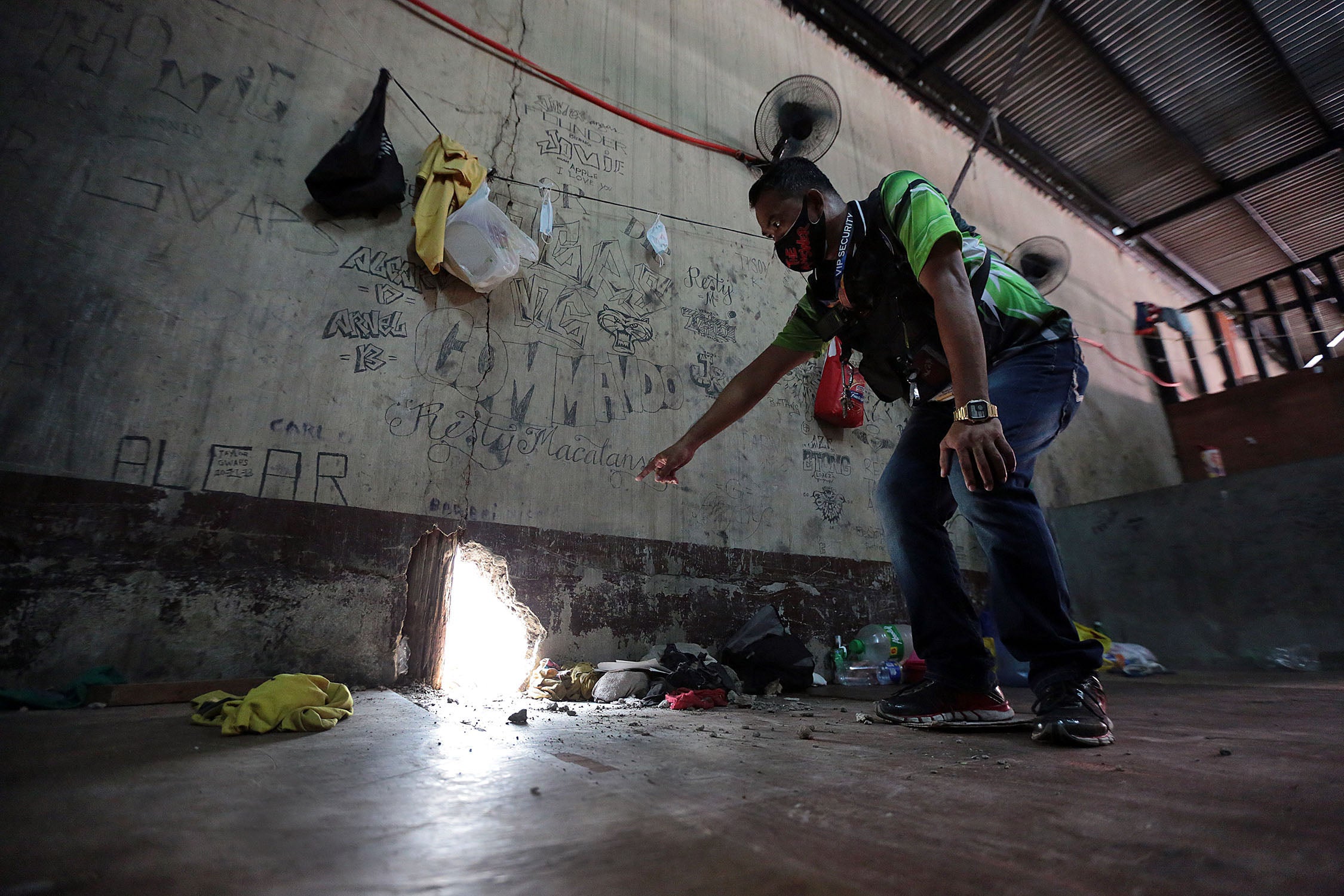 JUST ENOUGH OPENING Fifteen out of 32 detainees were able to squeeze through a small hole in the wall and escape from the holding area of the Caloocan police near City Hall early Thursday. Five of them were recaptured later. At least two police officers in charge of guarding them are facing sanctions for negligence of duty. —GRIG C. MONTEGRANDE

Two police officers are set to be charged for negligence after 15 detainees at the Caloocan City’s temporary custodial facility escaped early on Thursday.

In an interview with reporters, Caloocan police chief Col. Dario Menor said: “We will file evasion through negligence. After we file the criminal charge, we will follow it up with an administrative case.”

Fifteen detainees at the Custodial Facility Unit Extension near Caloocan City Hall escaped from the holding area through a hole that they made on the cell wall. Two of them were immediately captured.

According to the Northern Police District, five escapees had already been captured by authorities by 9 p.m., while the manhunt for the remaining 10 continues. The escapees are facing different charges, from theft, robbery and extortion, alarm and scandal, unjust vexation to possession of illegal drugs.

Menor said that the persons under police custody on Monday started chipping away a portion of the cell wall to create a hole big enough for them to escape. The detainees used concrete nails to carve the hole.

Fifteen of 32 detainees inside the facility—which was designated as an isolation facility for those who will be transferred to the Bureau of Jail Management and Penology (BJMP)—joined the jailbreak.

“The detainees who escaped were skinny and they managed to squeeze out of the small hole,” Menor told the Inquirer in an interview.

Among those who were placed in the said facility were two detainees, who tested positive in a rapid test but whose swab test results were negative, individuals suffering from cough or were considered too thin.

“They were not immediately accepted by the BJMP because they were skinny or that they were coughing. Today is supposed to be their 21st day in isolation,” Menor added.

A total of 18 detainees were turned over to the BJMP on Thursday, and that the temporary holding facility near the City Hall was empty, Menor said.