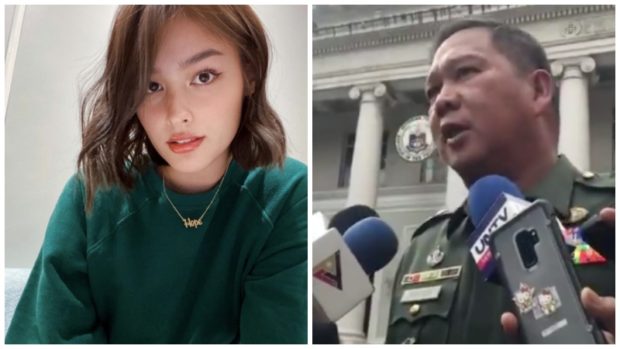 A statement by a military commander warning actress Liza Soberano against associating with progressive women’s group Gabriela drew outrage on Thursday, with one lawmaker in turn warning the general to “be ready” at his next confirmation hearing.

Sen. Risa Hontiveros on Thursday criticized Lt. Gen. Antonio Parlade Jr., head of the Southern Luzon Command of the Armed Forces of the Philippines, for his statement earlier which was perceived on social media to constitute a threat against the popular actress, who was a guest at a webinar on Tuesday by Gabriela Youth which focused on issues confronting young women amid the coronavirus pandemic.

“Liza Soberano, there’s still a chance to abdicate that group. If you don’t, you will suffer the same fate as Josephine Anne Lapira,” said Parlade, who is also spokesperson of the National Task Force to End Local Communist Armed Conflicts.

Lapira, 22, was a student of the University of the Philippines-Manila who was killed in November 2017 in what the military reported as an encounter in Batangas province between government forces and rebels of the New People’s Army (NPA).

“It’s a pity she (Lapira) learned about non sense (sic) things like nabbing a firearm, exploitation while already inside the underground. It was too late, she is dead,” Parlade said.

‘She has to be protected’

In the same statement, Parlade called on the public “not to Red-tag Liza Soberano,” since she was “not yet” a member of the NPA.

“It’s not fair to her. She is merely supporting advocacy for women’s rights. She has to be protected in the exercise of her rights. Is she an NPA? No, of course not. Not yet,” Parlade said in his statement which was also posted on the Facebook page of the task force.

“Let’s help educate her and the other celebrity targets of Malayang Kilusan ng Bagong Kababaihan, the underground mass organization hiding under Gabriela Women’s Party,” said the general, who had earlier criticized former Miss Universe Catriona Gray for speaking out on certain issues, such as the government’s shutdown of broadcasting network ABS-CBN where Soberano was a leading talent.

Hontiveros in her statement said, “We will not forget this. I will remember all that you (Parlade) have done so better be ready to answer for them next time you face the (Commission on Appointments). I will not let this pass.”

“You should not use your power as a military general to scare off and threaten these women. Your threats and harassment are unacceptable [because] any attempts to silence them is in effect allowing the violence, rape and abuses being suffered by many Filipinos,” added the senator, a sitting member of the commission who also heads the Senate committee on women, children, family relations and gender equality.

Hontiveros said Parlade acted “like a lamb” when he attended a recent confirmation hearing.

She said, “I gave you the benefit of the doubt during your promotion hearing because I believed that, just like my late husband Frank, you abide by the motto of the PMA (Philippine Military Academy)—courage, integrity and loyalty.”

She urged Soberano and Gray not to be cowed in speaking out on abuses against women.

“This is your constitutional right; don’t be afraid. Just keep on standing up for your right to speak, as I and most of the Filipino people are with you. I salute and embrace you,” Hontiveros said.

Parlade, however, maintained his stand. In an interview with dzMM on Thursday afternoon, he said Soberano had not done anything wrong and that her “activism [was] welcome.”

But he insisted that Gabriela was an “underground” organization of the Communist Party of the Philippines whose “nature … is really violent,” and that Angela “Ella” Colmenares, a sister of actress Angel Locsin, was “really Red.”

Speaking about Colmenares in his statement, Parlade said, “The choice is yours Liza. And so with you Catriona. Don’t follow the path Ka Ella Colmenares … took in the underground and NPA Quezon. I am sure Angel Locsin and (former party list lawmaker) Neri Comenares will not tell you this.”

In her Facebook post on Friday, Colmenares said in response, “Yes, I believe in the protection of women’s rights and human rights, the same advocacies that Angel and Neri fight for, but so do millions of Filipinos across the country. That doesn’t mean that I’m a member of the NPA as what is being claimed. Practicing our constitutional rights that we are entitled to, expressing our opinions and having a belief different from the others does not entail that one should be Red-tagged.” —WITH REPORTS FROM MELVIN GASCON AND NESTOR CORRALES