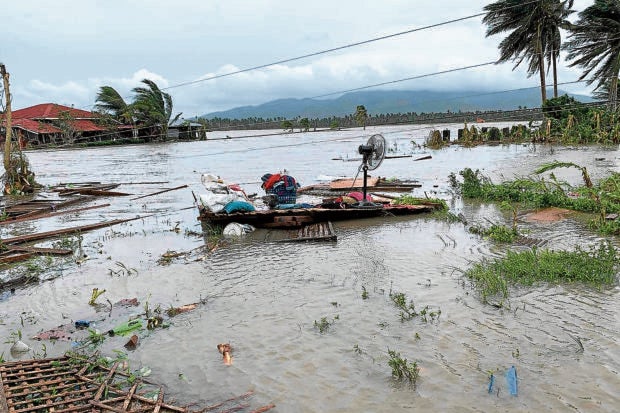 DESTRUCTION An electric fan and a few belongings of a family remain on the floor of a house destroyed by Typhoon “Quinta” in Pola town, Oriental Mindoro province on Oct. 26. —AFP

Oriental Mindoro province and Batangas City have been placed under a state of calamity while Occidental Mindoro, Batangas and Marinduque provinces are expected to follow suit following the onslaught of Typhoon “Quinta” (international name: Molave) on wide areas in southern Luzon, according to disaster officials. A day after the typhoon exited the country through the West Philippine Sea on Tuesday, disaster response agencies reported six people killed in Calabarzon (Cavite, Laguna, Batangas, Rizal and Quezon) and Mimaropa (Mindoro, Marinduque, Romblon and Palawan) regions.But they feared a higher toll with more people reported missing, including Rodolfo Sarabia, a crew member of a yacht that sank off Bauan town, Batangas province. The Coast Guard said a search had been launched.

“God bless us,” said Batangas Gov. Hermilando Mandanas, even as his province’s economy had yet to fully recover since the eruption of Taal Volcano in January.In its 5 p.m. bulletin on Tuesday, the Philippine Atmospheric, Geophysical and Astronomical Services Administration (Pagasa) said Quinta was detected 310 kilometers north-northwest of Kalayaan Islands in Palawan, moving westward at 30 km per hour. The typhoon was expected to make landfall in Vietnam.

Across Mimaropa, Quinta forced 1,990 families (6,743 people) to seek refuge in evacuation centers or in their relatives’ houses.

Batangas City was placed under a state of calamity after more than 300 families lost their homes while the Talumpok Silangan Bridge and a portion of the national road there were destroyed, Mayor Beverley Dimacuha said.

The disaster risk reduction and management offices in the affected provinces identified the fatalities as Gemilyn Morales, 24, and her 8-month-old baby who drowned while crossing a river in Occidental Mindoro; Epifanio Velasco of Mogpog, Marinduque; Sherwin Familaran, 18, of Odiongan, Romblon; Leonita Talamisan, 60, of Puerto Galera, Oriental Mindoro; and Mary Grace Anonuevo, 24, of San Pablo City in Laguna.

In Marinduque, the hardest-hit towns were Torrijos and Sta. Cruz. The typhoon also battered the coastal towns of Lobo and Mabini in Batangas and Puerto Galera.

After four months of closure due to the coronavirus pandemic, tourism in Puerto Galera had just started to pick up with a weekly average of 200 to 300 tourists, according to Mayor Rocky Ilagan.“Please help us send word that our beaches and tourist sites are fine and tourists should not be discouraged from coming,” Ilagan said.

Before barreling through southern Luzon, Quinta pounded Bicol where crops and fisheries worth P286.2 million were damaged, according to the Office of Civil Defense. Most of the crop losses were reported in 5,588 hectares of farmlands in Sorsogon and Camarines Sur provinces.

In Bulacan province, 30 people were rescued after they were trapped during a flash flood that struck San Miguel town at dawn on Tuesday.

Renan Clifford Herrera, town disaster risk reduction and management officer, said floodwater rose to 2 meters (6 feet) in some areas in San Miguel, the catch basin for water from the mountains.

The rains dumped by Quinta raised the elevation of Angat Dam, also in Bulacan, which was at 198.96 meters above sea level as of Tuesday. The watershed’s stock was at 197 masl the previous day.

In Pampanga province, floods damaged at least P70 million worth of rice and other crops in the towns of Apalit and Candaba. At a press briefing on Tuesday, Social Welfare Undersecretary Rene Glenn Paje said more than 12,500 families, or more than 51,000 people from Bicol, Central Luzon, Calabarzon, Mimaropa and Western Visayas regions were affected by the typhoon.The Department of Social Welfare and Development has P302 million worth of standby funds, said Paje, adding that the agency was ready to provide assistance to local governments to increase their inventory of family food packs and nonfood items. —REPORTS FROM MARICAR CINCO, MAR ARGUELLES, CARMELA REYES-ESTROPE, TONETTE OREJAS, ARMAND GALANG AND NIKKA VALENZUELA INQ