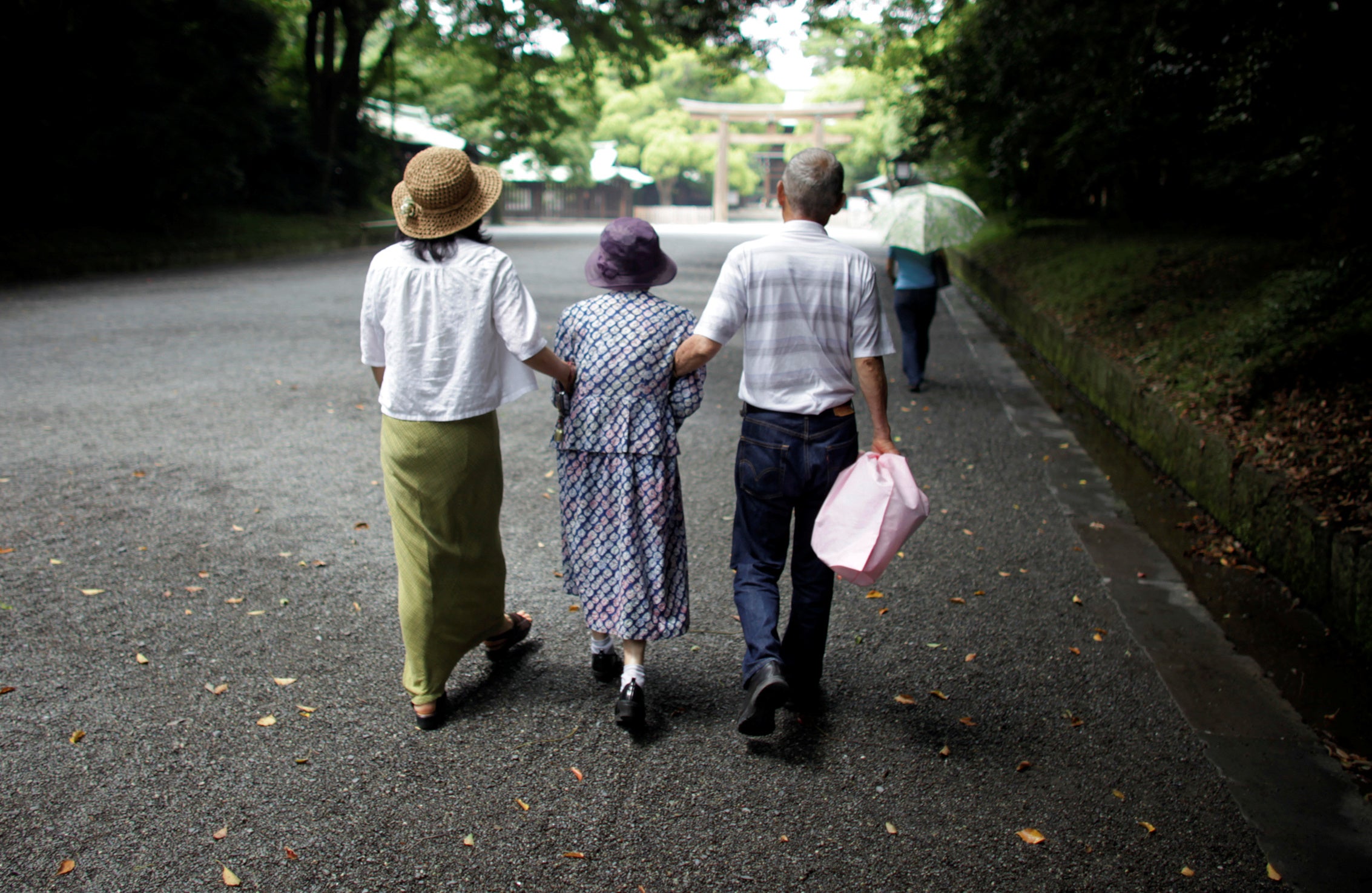 FILE PHOTO: An elderly woman is led to a temple in Tokyo in this July 17, 2009 file photo. Japan is ageing far faster than any other developed country. More than a quarter of Japanese are set to be over 65 by 2015, a trend that could burden a dwindling workforce with unmanageable social security costs. REUTERS/Thomas White/Files

TOKYO—Tumbling numbers of pregnancies and marriages in Japan during the coronavirus pandemic are likely to intensify a demographic crisis in the rapidly aging nation.

Japan has the most aged society in the world, with more than 35% of its population expected to be 65 and over by 2050, a trend that poses risks for economic growth and straining government finances.

“I reckon the spread of the coronavirus is having many people worried about getting pregnant, giving births and rearing babies,” Tetsushi Sakamoto, minister in charge of responses to Japan’s declining birthrates, told a news conference on Friday.

Recently published official data showed the number of notified pregnancies in the three months to July fell 11.4% from a year earlier, while the number of marriages over the same period dropped 36.9%. The sharp decline in marriages matters because the majority of babies in Japan are born in wedlock.

“This is very serious because negative effects could stay on, with the economic downturn leading to fewer marriages, and then to fewer births,” said Hideo Kumano, executive chief economist at Dai-ichi Life Research Institute.

The pandemic has exacerbated a preexisting downward trend in the birthrate, which former Prime Minister Shinzo Abe called a “national crisis.” The number of births in 2019 was down 5.8% to around 865,000, the lowest annual figure ever.

The Japan Pediatric Association has warned the falling birthrate could be expedited by ten years because of the pandemic, a trend that could not only wipe out pediatric medicine but have far-reaching effects.

The International Monetary Fund has forecast global economic growth of 5.2% in 2021, but expects Japan’s growth to be 2.3%. Kumano said depopulation was the major factor in the differing outlooks.

A recent survey by the Nikkei newspaper showed that the majority of 22 economists polled expect that the Japanese economy will not come back to pre-pandemic levels before 2024, indicating a prolonged headwind against getting married.

Policymakers are scrambling to address the crisis, covering fertility treatment with health insurance and doubling the upper limit of a one-off government allowance for newlyweds to 600,000 yen ($5,726).

“There are various predictions on what will happen if the number of births keeps falling, but one thing is certain. Current systems, including the social security system, will no longer be functional,” Masaji Matsuyama, former minister overseeing the issue of declining births, told Reuters.

“It will be a crisis in which the very existence of the nation as we know it is at stake.”