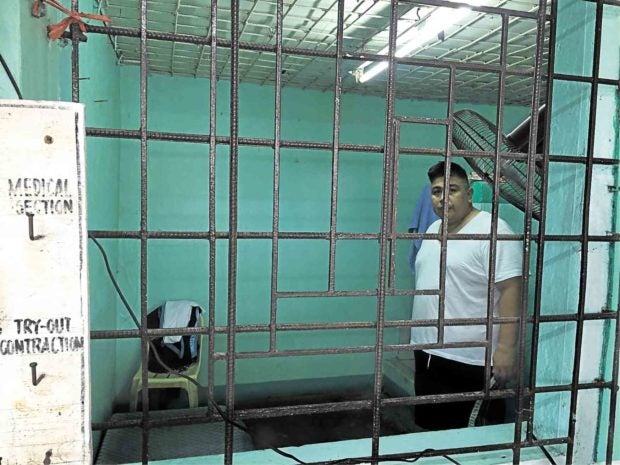 FOR BEING EVASIVE Police officer Rodney Baloyo suddenly became an “inmate” at the New Bilibid Prison after he was cited for contempt by the Senate justice committee, which is looking into police corruption involving “ninja cops,” or officers who pilfer confiscated illegal drugs. —PHOTO COURTESY OF THE BUREAU OF CORRECTIONS (FILE)

Gordon, chair of the Senate blue ribbon committee, said he granted the transfer of Lt. Col. Rodney Baloyo after his family requested that he be removed from the NBP.

(I talked with Senate President Vicente Sotto III, I said ‘The wife is appealing.’ I also talked with a Senate lawyer.)

(He may die there in Muntinlupa because Sebastian was said to have died there because of COVID.)

Baloyo has been detained at the NBP since October last year after the Senate blue ribbon committee cited him in contempt for being “very evasive” during a hearing into the “ninja cops” controversy.

According to Gordon, the papers approving Baloyo’s transfer to the Angeles City Jail are already with the Senate Sergeant-at-Arms for implementation.

“I don’t know if he’s (Baloyo) already in Angeles by now,” he told reporters.

Gordon said he decided to allow Baloyo’s transfer due to humanitarian reasons.

“He’s diabetic, he’s in a place that is dangerous because may mga tao na malalakas na kakampi niya na baka maging kalaban niya [There may be influential people inside who is on his side who may later become his enemy,” he added but did not elaborate.

“He wants to be close to his family and then…yung isang anak niya bulag [One of his children is blind],” the senator said.

Gordon’s committee had previously denied a police request to transfer Baloyo to a Pampanga jail to appear before a court there.

Baloyo headed the anti-drug operation in Pampanga in 2013 where he and 12 other Pampanga policemen were charged for grave misconduct and demoted by one rank in 2017.