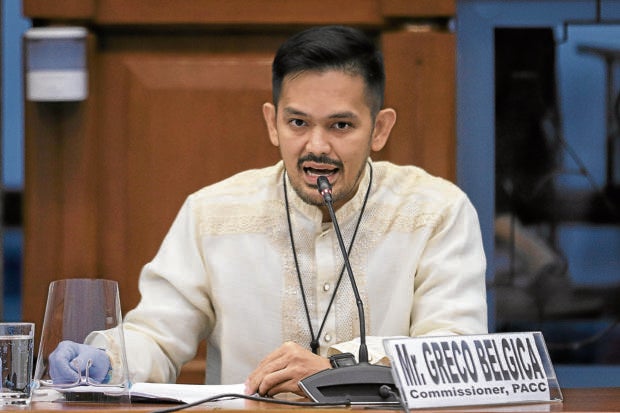 MANILA, Philippines — Reports received by the Presidential Anti-Corruption Commission (PACC) show that lawmakers supposedly involved in the alleged corruption in the Department of Public Works and Highways (DPWH) get at least 10 to 15 percent cut per infrastructure project, Commissioner Greco Belgica disclosed Tuesday.

“Right now, [based on] the reports that came to us, legislators will get 10 to 15 percent per project. Normally it’s advanced. It varies per project but that’s the basic minimum,” Belgica said in an interview with ABS-CBN News Channel.

District engineers and contractors allegedly also get a cut in the infrastructure funds, said Belgica.

However, the PACC commissioner underscored that these are just allegations as of the moment.

“These are allegations, an open secret. But then until we have evidence to it, maybe that’s the time to talk about it,” Belgica said.

During the interview, Belgica was asked how many congressmen allegedly involved in corrupt activities that the PACC is monitoring in its investigation of the DPWH.

Belgica pointed out that the PACC has no jurisdiction over elected officials and government employees that are not presidential appointees. However, he said his office has been receiving “a lot” of reports linking congressmen in the corrupt practices.

“We’re investigating the entire DPWH. We spoke to all district engineers so we’re building up the report right now. As to exactly how many, as of now, the numbers have been growing by the day,” Belgica said.

Belgica said it is the “same story” all over the country, with the congressman having chosen a contractor.

The contractor will then present itself to the district engineer who would then get the confirmation from the congressman.

“Sweldo (salary), that’s what they call it, for those contractors who will not win a certain project. He will just receive a salary from the winning contractor,” Belgica said.

In the end, around 50 percent of the fund would go to the project itself, leading to substandard and incomplete projects, said Belgica.

Belgica said his office will send its initial report on its probe on DPWH this week.