Airlines suffering from business class blues in age of COVID-19 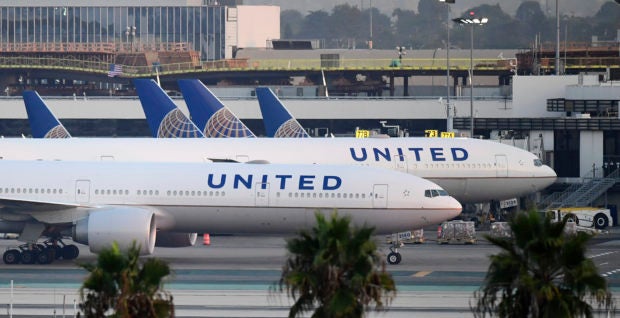 United Airlines aircraft are seen on the tarmac at Los Angeles International Airport in Los Angeles, California in October 1, 2020. – American Airlines has announced it will start furlouging 19,000 employees today due to the ongoing coronavirus pandemic as the Payroll Suppport Program (PSP) under the CARES Act expires today. (Photo by Frederic J. BROWN / AFP)

NEW YORK – The COVID-19 pandemic has ushered in the era of video meetings. But can Zoom really replace in-person meetings that require business executives to travel?

US airlines have suffered a steep decline in this lucrative category of travel. They do expect a rebound — just not right away.

“I suddenly stopped travelling in March because of the concerns around Covid,” JJ Kinahan, market strategist at TD AmeriTrade, told AFP.

The halt was a bit of a shock for someone who typically spent about 75 nights a year away from home for work. Now his company only authorizes travel on a case-by-case basis.

While Kinahan says he does not miss the flights, he does miss the personal connection with hotel doormen and receptionists he would encounter regularly in his travels.

As for Zoom meetings, he said, “you don’t have the same back and forth.”

Airlines are really feeling the pain: the four largest US carriers — American, United, Delta and Southwest — together lost nearly $11 billion in the third quarter.

For the first time since mid-March, the number of travelers passing through airport security on October 18 exceeded the one million mark. But that is still far below the 2.6 million recorded on the same day in 2019.

Many companies have begun to authorize travel, but only in very limited amounts.

Companies have to consider the legal ramifications of asking employees to get on a plane.

Alexandra Cunningham of the law firm Hunton Andrews Kurth notes that travel is unavoidable in some cases, such as repairs that require a specialized technician.

While some workers in enclosed places, like slaughterhouses and cruise ships, have been able to claim compensation after falling ill, it is not clear if an employee would be able to successfully prove they contracted Covid-19 while on a business trip, she said.

Even so, “an employer’s best protection right now… is to follow the guidance of the CDC, to limit travel to essential business,” she said, referring to the Centers for Disease Control and Prevention.

Different quarantine rules in some US states also can make short trips impractical.

The disappearance of business travelers is a big problem for airlines.

While they comprise only about a third of passengers, they account for half of annual revenue, according to the industry group Airlines for America (A4A).

“It was our bread and butter,” he said of the segment that has collapsed by 85-90 percent.

Kirby tried to remain upbeat though he said he does not see a rebound until late next year, while volume will not return to normal until 2024.

“Just like 9/11, everybody said the world is going to change, people aren’t going to fly. They were wrong,” he said this week on CNBC.

But he added, “I’ll bet you it’s a long time from now — it may be 10 years before business travel recovers.”

But “it’s not going to be a substitute,” he said.

Meanwhile, the rise in teleworking could even help air travel, as remote workers have to make the trek back to their offices a few days a month, United executive vice president Andrew Nocella said on a conference call.

“Business traffic may be different, but we think it will return,” he said.