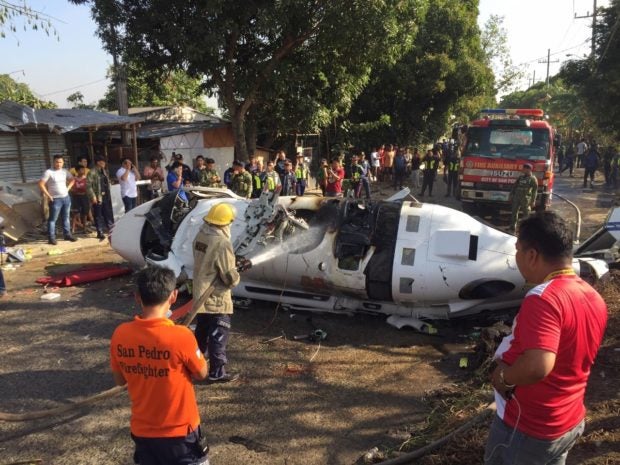 A firefighter douses the fire in a helicopter that crashed while carrying then PNP chief Gen. Archie Gamboa and seven others in San Pedro City, Laguna. Photo courtesy of Roselle Aquino

MANILA, Philippines — The pilot in command during the police helicopter crash in Laguna last March is facing an administrative case of grave misconduct before the Philippine National Police Internal Affairs Service (PNP-IAS).

PNP spokesperson Col. Ysmael Yu on Tuesday said findings of a special investigation task group (SITG) assigned to probe the incident recommended that the pilot in command “be held accountable for criminal and administrative capabilities.”

Yu, meanwhile, said that the filing of a criminal case is still subject for review by the office of PNP chief Gen. Camilo Cascolan.

Based on the findings of the SITG, the pilot in command failed to conduct a risk assessment before the chopper’s takeoff. Yu said this is required for a trained pilot.

There was also a lack of situational awareness and evaluation of surroundings, which are part of the protocol for safe and proper takeoff, and there were some lapses in judgment on the part of the pilot in command.

The SITG also said there was no trouble in both engines of the chopper and that it was “airworthy.”

The police officials were set to inspect a compound of the PNP Highway Patrol Group when the accident happened.

Maj. Gen. Jose Maria Ramos, who was among the passengers in critical condition following the crash, passed away on Tuesday at 12:07 a.m.

Cascolan extended his condolences to the family of Ramos and to the entire Philippine Military Academy “Sinagtala” Class of 1986.

“Police Major General Joevic Ramos fought a good fight to enjoy his supposed retirement from the service on November 25 with his family, but the Almighty has another plan for him,” Cascolan said.

“The PNP extends its deepest sympathies for his wife, children, and other members of his family, that include the PMA Sinagtala Class of 1986,” he added.