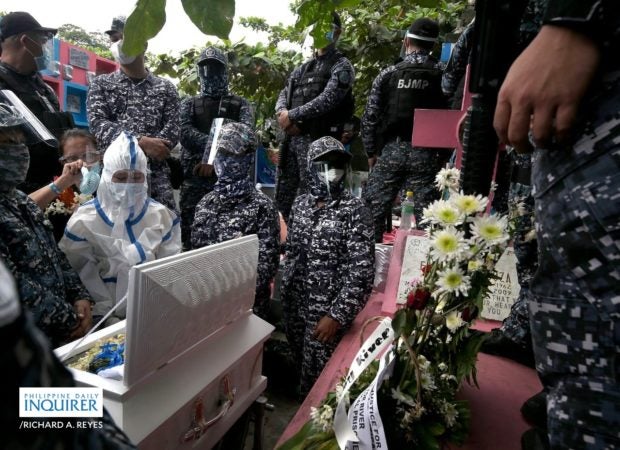 MANILA, Philippines — The lawyers of detained activist Reina Mae Nasino filed on Monday a supplemental manifestation before the court handling her case about the “cruel and inhuman” she got from law enforcement agencies during the wake and burial of her three-month-old daughter River.

The manifestation was filed at the Branch 47 of the Manila Regional Trial Court in Manila by members of the National Union of Peoples’ Lawyers — namely Edre Olalia, Ephraim Cortez, Julian Oliva Jr., Josalee Deinla, Katherine Panguban and Maria Sol Taule.

The lawyers said the burial of River — who died of respiratory illness — took place with the interference of the Bureau of Jail Management and Penology (BJMP) and the Philippine National Police (PN).

Last Friday, as River was scheduled to be laid to rest at the Manila North Cemetery, things took an unexpected turn when several police officers showed up to guard the funeral house.

Then during the funeral march, the officers supposedly signaled the driver of the hearse to move faster — which ended up with the hearse leaving the mourners behind.

“Instead of simply providing ‘escort’ to the accused during her inordinately brief furlough, about 43 jail and police officers hijacked and commandeered the event and denied the accused and her family of their one and only last chance to peacefully and solemnly lay the child to her final resting place,” the seven-page manifestation read.

“Against the family’s wishes, these armed police officers barred supporters from entering the funeral home.  They also prohibited members of progressive organizations from carrying legal and legitimate placards calling for justice and threatened to confiscate them,” the manifestation added.

The lawyers also mentioned that Nasino’s mother — River’s grandmother — tried to plead with the cops in the area by kneeling while asking them to allow them to grieve.

The case of Nasino, who was arrested in a November 2019 police operation for alleged illegal possession of firearms and explosives, has become a controversial one due to the issues surrounding it.

When Nasino was caught, she did not know that she was already one-month pregnant.

Eventually, she gave birth to River last July while detained at the Manila City Jail.

Nasino asked through her lawyers that she be freed temporarily to protect her and her newborn baby from possibly contracting COVID-19 in jail, but only River was allowed to leave.

Nasino then asked that River be allowed to stay with her, but the court did not budge.

Last Oct. 10, after showing coronavirus symptoms, River died while inside the intensive care unit of the Philippine General Hospital.

But the issues did not stop there: What was originally a three-day furlough was reduced to just several hours in a span of three days — something that rights groups frowned at.

Nasino’s lawyers believe that both BJMP and PNP would deny their accusations, but they noted that the pieces of evidence they submitted — footages taken by media outfits during the debacle — would prove otherwise.

“The BJMP and the PNP may deny or try to excuse their cruel, inhuman, and degrading treatment of the accused during her furlough, but in due time, she will see to it that such injustices will not be forgotten and go unpunished,” they added.

READ: CHR looking into Nasino case, ‘deeply concerned’ on how gov’t is handling it