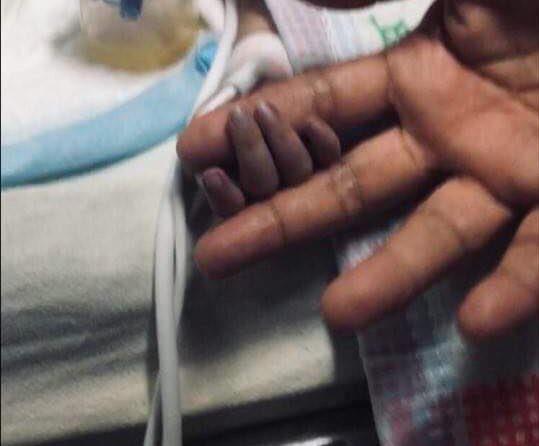 MANILA, Philippines — Three-month-old baby River could no longer wait for her political detainee mother. She died at around 9 in the evening Friday.

“The baby is gone. No words could ever capture this human tragedy. Heartbreaking does not even come close to it. What kind of justice system, nay, society, do we have to let this inhumanity and injustice to mother and child happen,” Atty. Edre Olalia of the National Union of People’s Lawyers (NUPL) said.

“We have not only lost our hearts, we have lost our souls if we do not feel the pain and the rage. We will lose our humanity if we see more Baby Rivers again. Justice,” he said.

Baby River who was born on the first week of July and was separated from her mother on Aug. 13, upon orders of the Manila Regional Trial Court Branch 20. A motion for reconsideration was filed but it was denied. The case was taken to the Court of Appeals which remains pending.

The baby stayed with Nasino’s aunt. However, the baby had diarrhea and was rushed to the Manila Medical Center, and then transferred to the Philippine General Hospital. She was diagnosed with acute gastro-enteritis.

Nasino, who was one month pregnant at that time, was arrested together with her two colleagues on November 5, 2019, when cops from the Manila Police District raided the office of Bayan-Manila, where the three were staying, using a search warrant issued by Quezon City Regional Trial Court Branch 89 Executive Judge Cecilyn Burgos-Villavert.

The raid was part of coordinated operations by the Philippine National Police in several offices and homes of members of non-governmental organizations in Manila and Negros Occidental.

Nasino asserts that the charges of illegal possession of firearms and explosive against her and her colleagues were trumped up as the “evidence” against them were planted by the police.

On April 8, 2020, Nasino and other political prisoners filed a petition with the Supreme Court to allow their temporary freedom on humanitarian grounds. The petitioners were mostly elderly with medical condition while Nasino was pregnant, and another petitioner had leprosy.

The high court, however, tossed the responsibility on whether or not to allow the temporary release before the lower courts.

Nasino’s lawyers, meanwhile, sought the dismissal of the case against her but was denied by Manila RTC Branch 20 Judge Marivic Balisi Umali. She also denied another motion to allow Nasino to stay with her child for at least a month to breastfeed her.

They were separated on Aug. 13. Another court is now handling the case as well as an urgent motion for Nasino to see her child one last time.