MANILA, Philippines — The slow rehabilitation of Marawi City three years after being ruined by a five-month siege of Islamic State sympathizers can be blamed on confusing land titles and on the Marawi community itself, President Rodrigo Duterte said on Monday.

“You know [rehabilitating] Marawi is not easy — we started it and we are at it already — because the clearing of explosives took a long time.  Then you have to contend with titles,” Duterte said, speaking partly in Filipino, in a pre-recorded address aired late at night.

According to him, some parcels of land had duplicate titles — including other areas that used to be owned by the military and had been divested for public ownership.

“So there’s no title that is really very clean. As a matter of fact, the land itself belongs to the military, the whole of it,” he said.

Duterte was referring to the series of proclamations of several presidents — from Elpidio Quirino to Fidel Ramos — on the partition of the Camp Keithley Military Reservation in Dansalan — the precursor of Marawi. 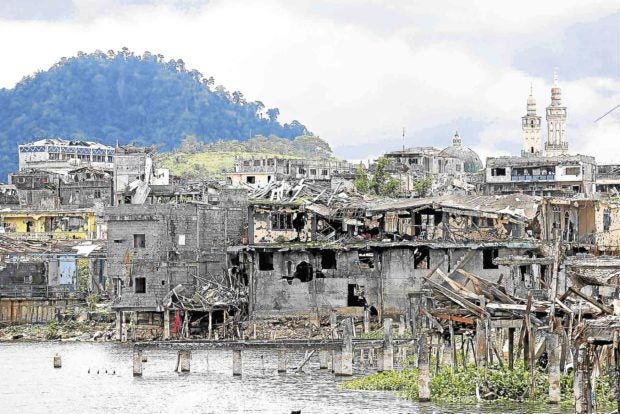 A large part of Marawi City was destroyed by the fighting between government troops and members of the Maute Group that laid siege to the Lanao del Sur capital from May to October 2017. (File photo by JEOFFREY MAITEM / Inquirer Mindanao)

From May to October 2017, the military and police forces battled to regain control of the city from the Maute Group.

Duterte noted that after the government divested itself of the land and released it into the public domain, issuing individual titles, some of which overlap.

“And the problem is about [the] Marawi community itself — hindi sa gobyerno [not the government],” Duterte said.

Regarding the funds allocated for the Marawi rehabilitation, he said: “The money is there. Do not worry. And we will continue to spend until such time that Marawi is rebuilt to its former glory.”

In his address, the President also slammed those who were claiming that the city had not been fully liberated.

It was unclear who Duterte was referring to, but Vice President Leni Robredo released a statement last Sunday — on the third anniversary of the city’s liberation, — saying that truly liberating the war-torn city should go beyond stopping the battle.

“Look, government liberated Marawi — not from the people of Marawi.  We do not do that, and we never did it,” Duterte said in his address.