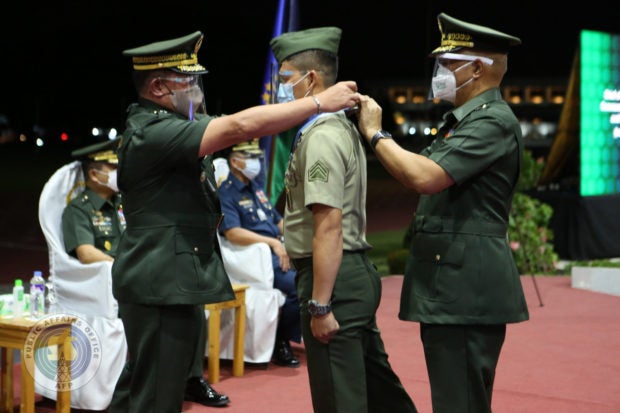 Three Army officers and an enlisted man were given the second highest award for combat, the Distinguished Conduct Star, on Monday (Oct. 19) for their roles in the 2017 military campaign to flush out Islamic State (IS) followers from Marawi City. AFP PAO

MANILA, Philippines—Three Army officers and an enlisted man were given the second highest award for combat on Monday for their roles in the 2017 military campaign to flush out Islamic State (IS) followers from Marawi City.

Gen. Gilbert Gapay, Armed Forces of the Philippines (AFP) chief of staff, pinned Distinguished Conduct Star medals to Col. Jose Jesus Luntok, Cpt. Arnel P. Lozada, 2Lt. George Francisco and SSgt. Roland Saludes for “acts of conspicuous courage and gallantry in action” in various combat and rescue missions during the five-month campaign to eliminate IS fighters, who laid siege to Marawi in a bid to turn it into an IS caliphate.

The four, who were given Distinguished Conduct Star medals, were among 18 individuals who received awards from the AFP at a ceremony in Camp Aguinaldo, the AFP headquarters, in ceremonies commemorating the anniversary of Marawi’s liberation from terrorists.

The 55th Engineer Brigade was also awarded the AFP chief commendation medal and ribbon for “meritorious and valuable achievements in the pursuit of providing engineer support operation in Marawi City that led to various socio-economic achievements.”

Dr. Isabel Cojuangco-Suntay, the only civilian recipient of an AFP award, was bestowed with the Order of Lapu-Lapu Rank of Magalong. The AFP said “she selflessly initiated, contributed, and defended the interests of the state against Isis-Maute terrorist group during the Marawi crisis.”

Local armed groups with IS ties and a few dozen foreign fighters occupied Marawi City for five months in 2017 as they tried to establish a caliphate in Southeast Asia. It was the Philippines’ biggest security crisis in recent years.