'Pepito' to become tropical storm before landfall; Signal No. 1 up over parts of Luzon | Inquirer News
Close
menu
search

‘Pepito’ to become tropical storm before landfall; Signal No. 1 up over parts of Luzon

MANILA, Philippines — Tropical Depression Pepito slightly intensified on Monday afternoon, as state meteorologists said they expect it to become a tropical storm prior to landfall.

The latest severe weather bulletin from the Philippine Atmospheric, Geophysical and Astronomical Services Administration (Pagasa) indicated that Pepito now packs maximum sustained winds of 55 kilometers per hour (kph) near the center and gustiness of up to 70 kph.

It was last spotted over the eastern waters of the Bicol Region, or around 410 kilometers east of Virac, Catanduanes.  Pepito’s movement also slowed down for a bit, now moving west-northwestward at a speed of 20 kph.

“‘Pepito’ is forecast to intensify into a tropical storm before it makes landfall. After crossing the landmass of Luzon, ‘Pepito’ may further intensify over the West Philippine Sea and may reach severe tropical storm category by Thursday,” Pagasa said. 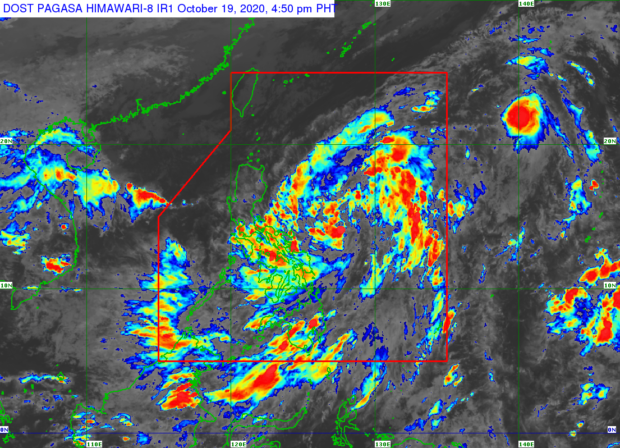 Pagasa hoisted Tropical Cyclone Wind Signal No. 1 over the following areas in anticipation of strong winds brought by Pepito:

It also warned that due to the tropical storm, light to moderate with at times heavy rains may be experienced from Monday afternoon to Tuesday morning in Quezon, Bicol Region, Eastern and Central Visayas, and Mindanao.

As flooding and rain-induced landslides are likewise possible during continuous heavy rainfall, Pagasa advised residents in low-lying areas and those near mountain slopes to monitor weather updates and coordinate with their respective Disaster Risk Reduction Management Offices.

Pagasa raised a gale warning over the seaboards of Batanes, Cagayan, Ilocos Norte, Ilocos Sur, and Isabela as Pepito and the northeasterly surface wind flow are seen to cause rough to very rough seas as both bring about strong to gale-force winds in those areas.

Waves may reach as high as 2.8 meters to 4.5 meters in the said provinces that Pagasa advised fisherfolk and boat transfer operators using small boats against setting out at sea at the moment.

Sea conditions over the eastern seaboards of Central Luzon, Bicol Region, Northern Samar, and Eastern Samar will be moderate to rough still because of Pepito, according to Pagasa.