Nothing to commemorate, Marawi residents say 3 years after end of siege | Inquirer News

Nothing to commemorate, Marawi residents say 3 years after end of siege 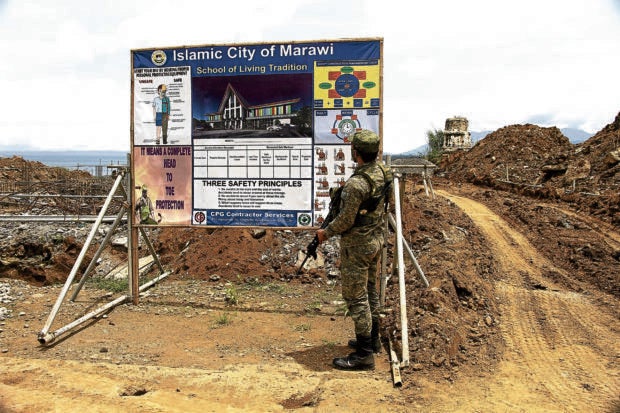 CAGAYAN DE ORO CITY, Misamis Oriental, Philippines — Three years after the government declared Marawi City liberated from an Islamic State-inspired terror group, displaced residents of ground zero, the scene of the five-month battle, remain barred from their homes and have yet to receive compensation for their losses.

“There is nothing to commemorate, only our pain and suffering that continue to this day,” Drieza Lininding, Moro Consensus Group chair, said who urged his fellow Maranaos, especially the displaced, not to take part in the activities lined up to mark the occasion.

“We don’t feel liberated at all, because after three years, we are still [prevented from going] back to our homes and communities for no apparent reason as the search and retrieval of unexploded bombs and ordnance have already been completed,” he added.

According to him, “the only activities that our group will support is the unconditional return to our homes and just compensation for our losses and damage.”

Aside from Lininding, the Marawi Reconstruction Conflict Watch (MRCW), an autonomous monitoring group composed mostly of Maranaos and Muslim professionals, said that since President Duterte declared the city free from the IS-inspired terror group on Oct. 17, 2017, “there [has] been no liberation to speak of.”

“Most of us have not been allowed to return to our homes and rebuild our lives. There has been no compensation for the damage to our personal properties. Thousands of us remain in shelters and housing projects in dire conditions, with sanitation and the supply of basic utilities wanting,” the group said in a statement emailed by International Alert.

“Even if some have benefited from what has been achieved so far, the majority of our people haven’t. The sad fact remains that progress is slow, funds are lacking, and implementation could be improved,” it added.

Another layer of hardship

The MRCW was formed three years ago to help in the Marawi reconstruction process and to channel wider public attention and participation in monitoring, Dr. Fedelinda Tawagon, president of Dansalan College Foundation and a member of the group, said.

“On the eve of the third anniversary of the so-called liberation of Marawi, the House of Representatives approved on third and final reading the proposed P4.06 trillion national budget for 2021 as the government [pushed] for the ‘rebound, reset and recovery’ from the adverse impact of COVID-19. But what about the displaced families and entire communities in Marawi who continue to live in shelters?” the MRCW said.

It added that those who lived in shelters shoulder the heavy burden and the constant risk of virus infection, the “stigma of being Muslims, of being displaced, and worse, of being associated with terrorists.”

The group cited data from the Provincial Inter-Agency Task Force showing that as of Sept. 30, there were 697 confirmed COVID-19 cases in Lanao del Sur province, with 354 or 50 percent of the cases from Marawi. Of the 153 active cases in the province, 111 or 72 percent were also from the city.

“The impact of the COVID-19 pandemic adds another layer to our hardship and suffering and reinforces existing vulnerabilities, threats and risks,” the MRCW said.

It added that as of August, the government had released only P22.2 billion for the rehabilitation of the city, less than half of the P60.5 billion total funding requirement.

“The dismal amount on top of issues on disbursement and absorptive capacity in the past paint a bleak picture for us all. With only 16 months left until the 2021 yearend deadline of completing reconstruction projects, can the Duterte administration still deliver its promise that Marawi will rise as a prosperous and peaceful city again?” it said.

Vice President Leni Robredo, meanwhile, renewed her call to rebuild Marawi as soon as possible as she remembered the “innocents who lost their lives in the conflict,” as well as the soldiers who defended the city “during those dangerous months, making the ultimate sacrifice for peace.”

However, she noted that until now, thousands of residents “remain displaced, its buildings remain in ruins, and the city has yet to reclaim any sense of normalcy, much less its former glory as a cultural and economic hub.”

“The siege may have been lifted, but the Marawi of today reminds us that violent extremism remains among the biggest threats to society. And to truly address it, frustrations must be met with compassion,” she added.