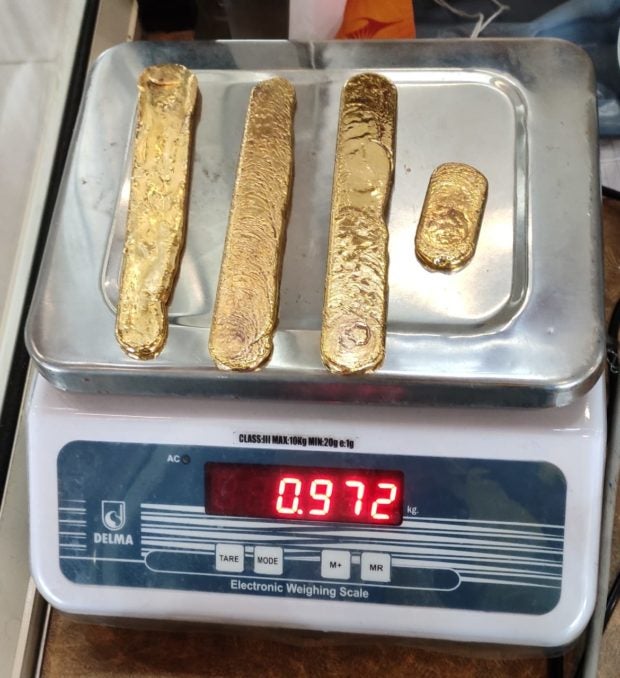 The pieces of gold seized from a passenger in India (Image: Twitter/@ccphqrskochi)

An airline passenger was arrested after hiding pieces of gold in his rectum to avoid paying tax upon landing at an airport in India.

Police seized the man (name withheld) when he arrived in Kannur International Airport from Dubai, United Arab Emirates. Officers from the Air Intelligence Unit extracted the gold from him, as per the Customs Preventive Commissionerate’s Twitter post on Oct. 13.

The flattened pieces of gold weighed 972 grams, the customs officials stated alongside a photo of them.

AIU Kannur seized gold in compound form (972 gm extracted) from a passenger who arrived from Dubai by flight G8 4013. The gold was concealed in the rectum.@cbic_india@cgstcustvm pic.twitter.com/jYJsxxslDm

The goods and services tax on gold in India is 18%, The National reported the day after.

Meanwhile, authorities caught another passenger on the same flight who was smuggling over three pounds of gold. The officers did not state how they were hidden.

Several Indian airports, as per report, had earlier seized gold between 300 grams and 3 kilograms concealed in capsules or lined in underwear. Ryan Arcadio /ra

Read Next
Zarate on Liza Soberano red-tagging: Nothing wrong with speaking up for exploited
EDITORS' PICK
House energy committee chair Arroyo bats for cheap electricity
Why Tagle is a leading papal contender
KWF has no power to ban, censor written works – Lagman
Powered by style, innovation and passion
A laptop that maximizes your WiFi so you can maximize your productivity
In Borongan, nuns play hoops (not mahjong)
MOST READ
Why Tagle is a leading papal contender
SRA officials should resign after ‘illegal sugar order’ – Zubiri
Arjo Atayde reveals proposal to Maine Mendoza was ‘more than a year’ in the making
Gilas gets solid core with Clarkson, Sotto planing in
Don't miss out on the latest news and information.