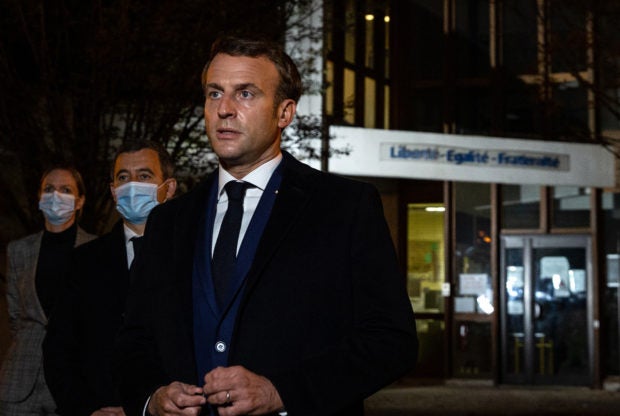 French President Emmanuel Macron (R), flanked by French Interior Minister Gerald Darmanin (2L), speaks to the press in front of a middle school in Conflans Saint-Honorine, 30kms northwest of Paris, on October 16, 2020, after a teacher was decapitated by an attacker who has been shot dead by policemen. – French anti-terror prosecutors said on October 16 they were investigating an assault in which a man was decapitated on the outskirts of Paris and the attacker shot by police. The attack happened at around 5 pm (1500 GMT) near a school in Conflans Saint-Honorine, a western suburb of the French capital. The man who was decapitated was a history teacher who had recently shown caricatures of the Prophet Mohammed in class. French prosecutors are treating the attack as a terror incident, which coincides with the trial of alleged accomplices of the 2015 Charlie Hebdo attackers and comes weeks after a man injured two people he thought worked for the magazine. (Photo by ABDULMONAM EASSA / POOL / AFP)

CONFLANS – SAINTE HONORINE, France  – French President Emmanuel Macron said on Friday that the killing of a teacher who had shown cartoons of the Prophet Mohammed in class bore the hallmarks of “an Islamist terrorist attack”.

Speaking near the scene where an assailant decapitated the teacher before being shot dead by police, a visibly moved Macron also said that “the entire nation” stands ready to defend teachers and that “obscurantism will not win”.