Trudeau: Canada will not be cowed by China on human rights | Inquirer News

Trudeau: Canada will not be cowed by China on human rights 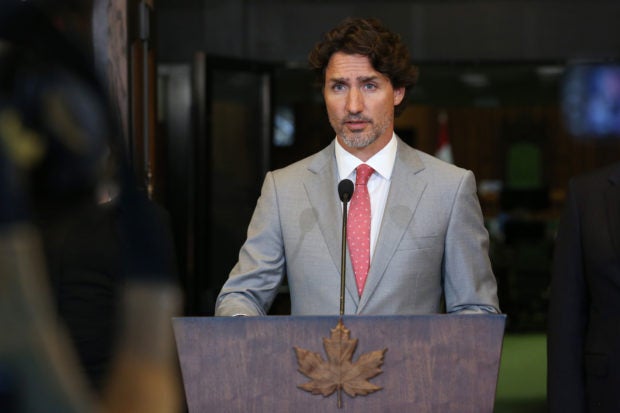 (FILES) In this file photo taken on August 18, 2020 Canada’s Prime Minister Justin Trudeau speaks during a news conference on Parliament Hill in Ottawa, Canada. – Canadian Prime Minister Justin Trudeau warned China on October 13, 2020, that its “coercive diplomacy,” repressive measures in Hong Kong and detention of Uighur Muslims are counterproductive for itself and the rest of the world. (Photo by Dave Chan / AFP)

China’s ambassador to Ottawa, Cong Peiwu, warned Canada on Thursday against granting asylum to Hong Kong activists, which he said could have consequences for the “health and security” for the 300,000 Canadians living in the theoretically autonomous Chinese territory.

The Canadian daily The Globe and Mail said Ottawa had recently granted asylum to a Hong Kong couple, which the Canadian government has neither confirmed nor denied.

But he added: “We don’t look to escalate.”

In a sign of the rising tensions between the two countries, Canadian Foreign Minister Francois-Philippe Champagne had earlier slammed the ambassador’s remarks as “totally unacceptable and disturbing.”

For his part, the new leader of the conservative opposition, Erin O’Toole, called on the Chinese diplomat “to fully retract his remarks and issue a public apology.”

“Should the Ambassador fail to do so expeditiously, we expect the government to withdraw his credentials,” he said.

Relations between China and Canada have been icy since December 2018 when Canada, acting on a US warrant, arrested the chief financial officer of Chinese telecoms giant Huawei.

Washington accused her of violating US sanctions against Iran and is pushing for her extradition.

Shortly after her arrest, China jailed a former Canadian diplomat, Michael Kovrig, and a Canadian businessman, Michael Spavor, on charges of spying, an act widely seen in western capitals as an act of reprisal by Beijing.