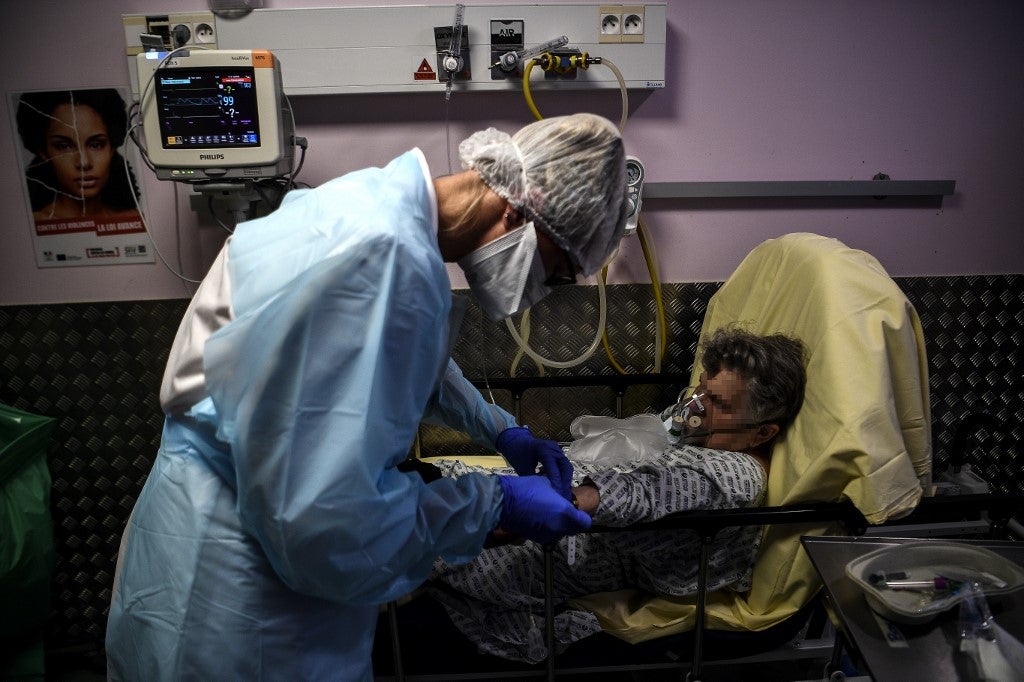 A nurse tends to an elderly woman suspected of being infected with Covid-19 at the emergency service of the Andre Gregoire hospital in Montreuil east of Paris on October 15, 2020. (Photo by Christophe ARCHAMBAULT / AFP)

PARIS, France — Fresh restrictions loomed for millions of Europeans at the weekend after the highest-ever worldwide number of coronavirus infections in a single day, while pharma giant Pfizer said Friday it could apply for emergency US authorisation for its vaccine next month.

An AFP tally based on official data showed that more than 400,000 new cases were reported across the world on Thursday, a figure only partly explained by increased testing since the first wave of the pandemic in March-April.

Across Europe, the average number of daily infections leapt 44 percent in a single week, to over 121,000.

“It’s terrible. It feels to me like being back in March,” said Hocine Saal, head of the emergency service at the hospital in Paris suburb Montreuil.

“What’s really difficult is taking on the Covid and non-Covid patients at the same time,” with numbers of non-coronavirus admissions mounting too, Saal said.

Paris and other French cities headed Friday into their final night before an anti-virus curfew bites, and Belgium said it would close bars and restaurants for four weeks starting Monday.

But in neighbouring Germany a Berlin court overturned nighttime restrictions.

Millions in England including London were just hours away from stricter measures, including a ban on household mixing, while bars and restaurants closed in Spain’s northeastern region of Catalonia.

In Greece, the densely populated northern area of Kozani went into a new lockdown.

Restrictions limited to certain regions or hours of the day reflect governments’ efforts to slow the spread of the pandemic while sparing battered economies a damaging full-on lockdown.

On Friday the number killed by the coronavirus worldwide topped 1.1 million, from almost 39 million cases.

In the medical world, hopes for one of the most promising Covid-19 treatments, the antiviral drug remdesivir, were dashed when a study backed by the World Health Organization found it does little to prevent deaths from the disease.

But pharma giant Pfizer said that if safety data expected in the third week of November is positive, it will apply for emergency use authorisation in the US for its Covid-19 vaccine.

Massachusetts-based Moderna has already said it aims to apply for authorisation for its candidate on November 25.

Funded by the US government, both companies have been running large-scale Phase 3 clinical trials since July and have already begun producing doses, with tens of millions potentially available by the end of the year.

“We are operating at the speed of science. This means we may know whether or not our vaccine is effective by the end of October,” Pfizer CEO Albert Bourla wrote in an open letter.

In France, the curfew affecting some 20 million people in Paris and eight other cities was due to start at midnight, and then come fully into force later Saturday from 9:00 pm to 6:00 am over the next weeks.

While it has broad public support, officials are worried about the heavy social and economic costs of a measure set to last at least a month.

In many European countries, infection controls have led to a backlash from defiant local authorities and businesses desperate to make ends meet.

She said residents were paying the price “by the loss of their daily pleasures, their freedom, or through economic hardship, because the bar and restaurant industry is being hit extremely hard.”

Similar unease was felt in England where London and seven other areas were facing new restrictions from Saturday.

In northwest England, particularly Manchester, where the number of positive cases is among the highest in Britain, local political leaders were still deadlocked in talks with the government over imposing even tighter controls.

Prime Minister Boris Johnson acknowledged the restrictions were “far from a pain-free course of action”.

“But I must stress the situation in Greater Manchester is grave and it worsens with each passing day,” he added.

Over in Berlin, such was the disquiet over restrictions that 11 restaurant owners challenged in court an order to close bars and eateries from 11 pm.

On Friday, the court overturned the order, finding that “it was not apparent” such a measure could help fight coronavirus.

The suspension echoed a similar court ruling in Madrid earlier this month that cancelled restrictions on 4.5 million people in and around the capital.

In Barcelona, people working in hospitality took to the streets, making noise with pots and pans and throwing eggs at the town hall after bars and restaurants were shut.

And in Brussels’ corridors of power, Finnish Prime Minister Sanna Marin had to leave an EU summit after coming into contact with an infected person.

The infection risks prompted some leaders to urge the bloc a return to virtual meetings, and German Chancellor Angela Merkel has already cancelled a November 16 Berlin summit.