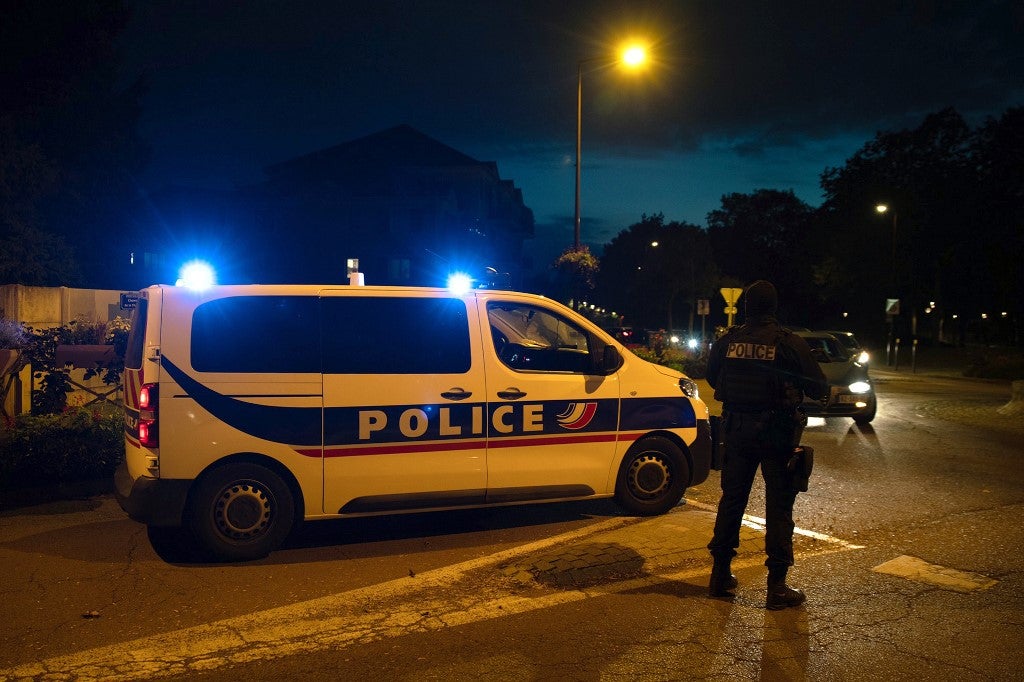 French police officers stand guard a street in Eragny on October 16, 2020, where an attacker was shot dead by policemen after he decapitated a man earlier on the same day in Conflans-Sainte-Honorine.  (Photo by ABDULMONAM EASSA / AFP)

PARIS, France — An assailant on Friday decapitated a history teacher in France who had recently shown cartoons of the Prophet Mohammed in class, police said.

The attacker, whose identity has not been established, was shot by police as they tried to arrest him and later died of his injuries, they said.

The attacker shouted “Allahu Akbar” (“God is Greater”) as police confronted him, a cry often heard in jihadist attacks, a police source said.

French anti-terror prosecutors said they were treating the assault as “a murder linked to a terrorist organisation” and related to a “criminal association with terrorists”.

French President Emmanuel Macron was to visit the scene of the attack later Friday, his office said.

The attack happened on the outskirts of Paris at around 5:00 pm near a school in Conflans Saint-Honorine, a northwestern suburb located some 30 kilometers from the center of the French capital.

According to a police source, the victim was a history teacher at a local middle school who recently discussed cartoons of the Prophet Mohammed in class.

A parent of a pupil at the school said Friday that the teacher may have created a “polemic” by asking Muslim pupils to leave the room before showing the cartoons.

“According to my son, he was super nice, super friendly, super kind,” the parent, Nordine Chaouadi, told AFPTV.

The teacher “simply said to the Muslim children: ‘Leave, I don’t want it to hurt your feelings’. That’s what my son told me,” he said.

Last month, charges were brought against a 25-year old Pakistani man who wounded two people with a meat cleaver to avenge the publication of caricatures of the Prophet Mohammed by the satirical weekly Charlie Hebdo.

The attacker seriously injured two employees of a TV production agency, whose offices are on the same block that used to house Charlie Hebdo. Both survived.

That attack came three weeks into an ongoing trial of suspected accomplices of the authors of the January 2015 attacks on Charlie Hebdo and a Jewish supermarket, which also saw a policewoman gunned down in the street.

Seventeen people were killed in the three-day spree that heralded a wave of Islamist violence in France that has so far claimed more than 250 lives.

The trial has sparked protests across France, with thousands of demonstrators rallying against Charlie Hebdo and the French government.

Police on Friday arrived at the scene after receiving a call about a suspicious individual loitering near the school, a police source said.

There they found the dead man and nearby sighted the suspect armed with a knife-like weapon, who threatened them as they tried to arrest him.

They opened fire and injured him severely, the source said. The man later died of his injuries, a judicial source said.

The scene was cordoned off and a bomb disposal unit dispatched because of the suspected presence of an explosive vest, the police source said.

Interior Minister Gerald Darmanin, who was on a visit to Morocco at the time of the attack, returned to Paris immediately after talking with Macron, as well as Prime Minister Jean Castex, his office said.

Macron briefly joined key ministers at a crisis group set up in the interior ministry, the president’s office said, before travelling to the scene of the attack where he was to meet with teachers at the school.

MPs stood as Renson said that “in the name of all of us, I want to honor the memory of the victim”.

Education Minister Jean-Michel Blanquer tweeted: “The Republic is under attack”, adding that “our unity and firmness are the only answers to the monstrosity that is Islamist terrorism”.

The attack comes only days after a follower of the Islamic State militant group who attacked a police officer outside Notre-Dame cathedral in Paris with a hammer was sentenced to 28 years in jail.

Farid Ikken, 43, charged at officers on patrol outside the cathedral on June 6, 2017, shouting “this is for Syria”.