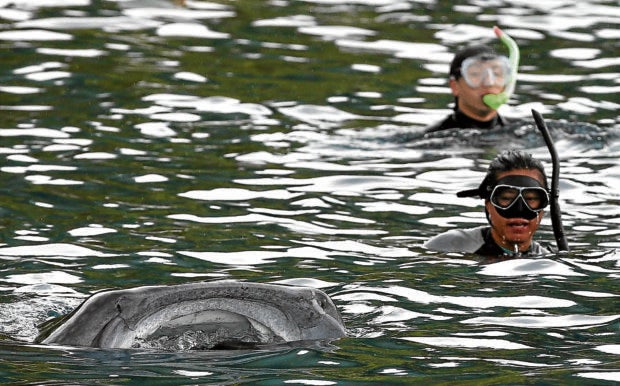 SWIMMING WITH ‘SHARK’ In this photo taken in 2019, a whale shark’s mouth is visible above water as it seeks fresh krill tossed by boatmen toward a spot where tourists can see the “gentle giant” up close in Oslob, Cebu. —LYN RILLON

MANILA, Philippines — At least 95 percent of endangered whale sharks (Rhincodon typus) observed in Oslob, Cebu province, since 2012 have been injured and scarred due to activities linked to wildlife tourism, according to a study that looked into the impact of tourism on the largest fish species in the world.

Researchers from the Large Marine Vertebrates Research Institute of the Philippines (Lamave), which published the paper in the journal Aquatic Conservation, Marine and Freshwater Ecosystems last week, underscored the urgent need to implement proper management interventions to ensure that tourism activities would not harm the whale sharks, locally known as “butanding.”

The research looked at photographs of 152 individual whale sharks off the coast of Barangay Tan-awan, which were taken from March 2012 to January 2015. These photos were used to monitor their presence and identify scars on their bodies and the accumulation of their injuries.

Research findings showed that the whale sharks frequenting Oslob had significantly more injuries compared to other populations studied in Australia, Mozambique and the Seychelles, where whale shark feeding is prohibited.

Oslob, located in the southern portion of Cebu, is among the most popular areas in the country for whale shark watching. Conservationists have repeatedly called for the stop of provisioning, or feeding, of whale sharks, which locals do to provide guaranteed wildlife encounters to tourists.

Abrasions were the most common type of scar seen in the posterior flank, upper caudal fin, and the dorsal and pectoral fins of the whale sharks, and were most likely due to close contact with ropes and small boats at the feeding site, according to the researchers.

The study also noted several lacerations on a number of the fish, which were caused by boat propellers. The injuries, it said, could be due to the whale sharks’ tendency to come close to boats as the locals practiced hand-feeding to ensure tourist interactions, as well as the increased number of motorized vessels in their habitat.

Lamave said that the whale sharks are fed with shrimp daily, which alters their natural migratory and foraging behaviors.

In a separate study published in Scientific Reports, researchers also from Lamave discovered that resident whale sharks spend six times longer at the ocean’s surface when at the feeding site, exposing them to high water temperatures that could affect their overall health and welfare. 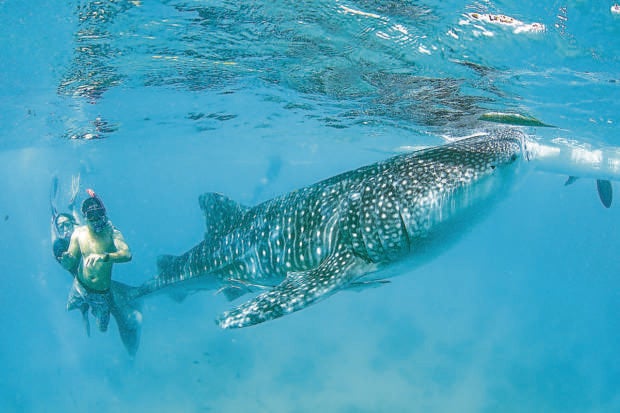 MAIN ATTRACTION Tourists have been flocking to Oslob in southern Cebu to interact with whale sharks, the coastal town’s main attraction. While tourismis booming, environmentalists are concerned after a study found that Oslob’s whale sharks, locally known as “butanding,” are harmed by their close contact with fishermen and visitors. —PHOTO COURTESY OF STEVE DE NEEF / LAMAVE

Since whale sharks are ectotherms, meaning they depend on the temperature of water columns to regulate body temperature, the change in their natural behavior showed that they would need to dive to deeper and colder waters to compensate for the prolonged periods they spent in warmer and shallower waters off Tan-awan. “Scars and wounds, even when nonlethal, may pose a serious risk to these endangered species, increasing the physiological stress of the animals, facilitating the contraction of diseases carried by pathogens, like virus and bacteria, and decreasing overall the health of the affected individuals,” Lamave said.

Lead author Luke Penketh said the study showed evidence of the “negative physical impacts” of tourism activities on whale sharks in Oslob, highlighting the need for change in the management of the tourism area.

“For the past eight years, Lamave has provided the local government unit of Oslob with numerous management solutions and interventions,” the group told the Inquirer. “Unfortunately, in eight years, little to no change has been executed to reduce the impact of tourism on whale sharks in Oslob.”