Indonesian, 2 others nabbed in bomb plot

ZAMBOANGA CITY — Security forces swooped down on a house in Jolo, Sulu, before dawn on Saturday and arrested three women, including an Indonesian, who are believed to be part of a plot to stage another terrorist bombing.

Gonzales said the three women were detained at the Criminal Investigation and Detection Unit of the Sulu police for documentation and filing of appropriate charges.

On the strength of a search warrant, the women were arrested after the authorities raided at 1:50 a.m. a house in Barangay San Raymundo that was believed to be owned by one Ben Quirino Yadah, alias Abu Sayyaf subleader Ben Tatoo.

Ben Tatoo is the husband of Alihasan, also known as Inda Nurhaina, while Jimlani is the wife of another Abu Sayyaf gunman Jahid Jama.

The Indonesian, also known as Cici, is believed to be the daughter of the Indonesian couple Rullie Rian Zeke and Ulfah Handayani Saleh who blew themselves up during a Mass at the Cathedral of Our Lady of Mount Carmel on Jan. 27, 2019, killing at least 18 people and injuring 82 others.

According to Malaysian newspaper Daily Express, the Indonesian couple hatched their plan to bomb the church within a month of arriving in the country with the help of Indonesian terrorists Mohamed Ali Suhari, 21, and Marwan Harun, 25, both based in Sabah. 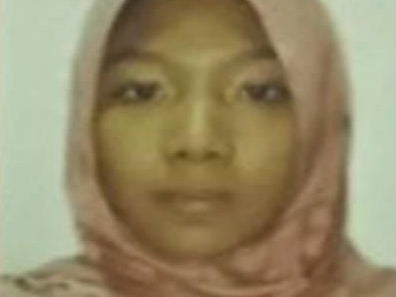 Malaysian authorities believed that the Indonesian couple met Ali and Marwan through 22-year-old Andi Baso, who would later marry the 18-year-old Cici.

The military said Andi Baso, also an Indonesian who was an ardent recruiter for the Abu Sayyaf in Indonesia and Malaysia, was killed in a gunfight with Army commandos in Patikul, Sulu, on Aug. 29, five days after the Jolo bombings on Aug. 24 that killed 15 people.

“We have been pursuing foreign terrorist suicide bombers in Sulu after the twin bombing of Jolo town [on] Aug. 24,” Gonzales said. “Rullie was first on our list since we have received intelligence reports that she is going to conduct suicide bombing after the death of her husband.”

According to Lt. Gen. Corleto Vinluan Jr., commander of the Western Mindanao Command, the operatives found a vest rigged with two pipe bombs and other components at Ben Tatoo’s house in Barangay San Raymundo.

The Aug. 24 bombing was believed to have been hatched by Abu Sayyaf bomb maker Mundi Sawadjaan, nephew of Hatib Hajan Sawadjaan, the Abu Sayyaf leader since the death of Isnilon Hapilon in 2017.

Malaysian media reported that Hatib is in custody of Cici’s siblings Aisha, 11, and Ahmad Ibrahim, 12. Indonesians officials have claimed that he had Aisha married to a Filipino extremist after they arrived in Mindanao in 2019.

In another development, three other suspected terrorists were arrested in Campo Islam village in Zamboanga City after a search yielded firearms and explosives on Friday.

Sarikin said the three were arrested by virtue of search warrants intended against Tula and Sadji, for illegal possession of firearms and explosives. Recovered from Tula were fragmentation grenade, .45-caliber pistol, more than two dozens of live ammunition of different weapons.

The enforcers also recovered a .45-caliber pistol and live ammunition from Jailani.