BOC-Port of Davao seizes P96M worth of illegally imported cigarettes 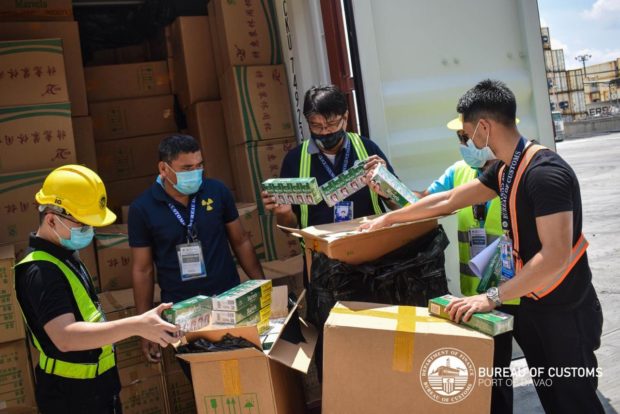 Personnel of the Bureau of Customs – Port of Davao inspect illegally imported cigarettes concealed in four 40-footer container vans. The items in the shipment were originally declared as plastic cups and fabric. Photo from BOC

BOC said Thursday that it issued an alert order against consignee Allycorp International Inc.’s shipments which were originally declared to contain 910 cartons of plastic cups and 3,015 boxes of various fabrics, after receiving information from intelligence sources on the true content of the shipments.

Authorities then immediately conducted physical examination of the shipments which led to the discovery of 3,628 boxes of assorted branded cigarettes.

Austria has issued warrants of seizure and detention for the illicit items over violation of the Customs Modernization and Tariff Act and Executive Order No. 245 or the Amended Rules and Regulations Governing the Exportation and Importation of Leaf Tobacco and Tobacco Products.