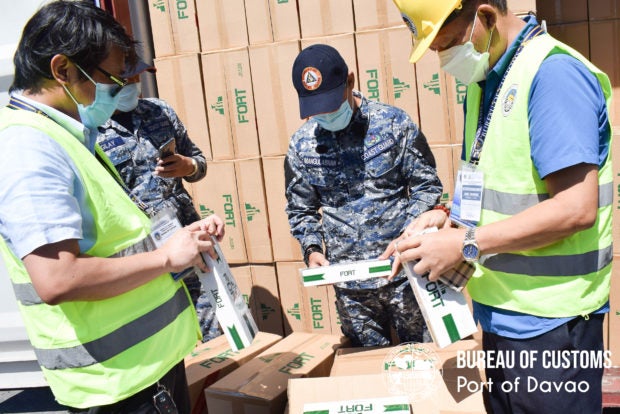 SEIZED. Customs agents and other law enforcers inspect a load of smuggled cigarettes that was apprehended by authorities for being misdeclared. Photo from BOC-Port of Davao

DAVAO CITY –– The Bureau of Customs (BOC) in the Davao region has vowed to strengthen border security and intensify intelligence gathering to sustain its drive against the entry of contrabands.

In a statement, Customs Collector Erastus Sandino Austria said the BOC-Davao has confiscated about P179.45 million worth of smuggled cigarettes in the last eight months.

These include hauls apprehended in the Davao port and in the sub-ports of Dadiangas in General Santos City and Polloc in Maguindanao.

Customs operatives apprehended four shipments in each of these ports.

The largest haul seized in Davao last July was estimated to be worth P107.4 million. The cigarettes, which came from Ningao, China, were not declared as such.

Austria attributed the successful operations to stronger border protection and the intensified intelligence gathering and inspection.

“Customs Davao will continue to strengthen its anti-smuggling efforts and its border security protocols by deploying more mobile X-ray machines at its various ports of entries and by continuously strengthening its partnership with other agencies,” Austria said.

He vowed to pursue the cases filed against those behind the smuggling attempts.