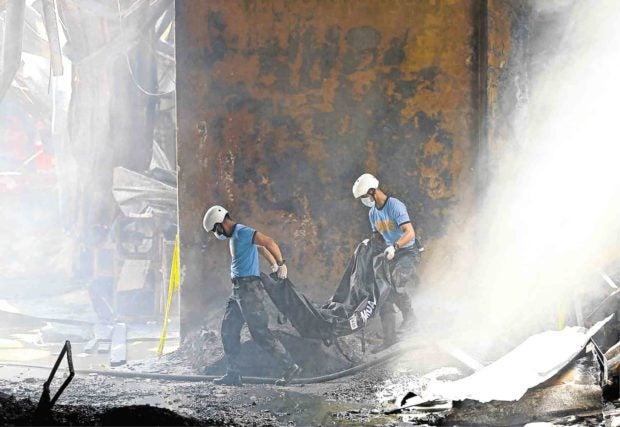 DEADLY BLAZE The lack of fire exits was one of the reasons for the high casualty rate in the May 13, 2015, fire. INQUIRER FILE PHOTO

MANILA, Philippines — Valenzuela City fire officers and a company official charged for the 2015 Kentex factory fire that claimed 72 lives were acquitted by the Sandiganbayan’s Second Division.

Ong was also acquitted of graft, as the prosecution failed to prove that he conspired with the officials involved.

“In the instant case, the Court finds that the accused did not commit an excusable lack of precaution in the exercise of their duties considering that they conducted inspections at the Kentex compound and noted several deficiencies […],” the anti-graft court said in a 60-page decision penned by Associate Justice Michael Frederick Musngi.

“Other than its bare assertion that all the accused conspired with the accused public officials, the prosecution failed to prove that there was indeed a conscious criminal design existing among them in committing the offense charged,” the court added.

After fire broke out at the Kentex compound–a footwear factory–last May 14, 2015, workers at establishment were trapped inside as iron bars installed a the windows prevented them from escaping the factory.

The incident sparked outrage from relatives of the victims and labor groups that demanded factory owners be charged for allegedly not following fire code standards.

Valenzuela Mayor Rex Gatchalian, who was also city mayor when the fire happened, was previously acquitted from the charges.

The court also noted that Ong cannot be held liable for the incident because while he was enlisted as Kentex’s general manager during the time of the incident, he was not the one coordinating with the city’s fire officials.  Instead, a certain “Josephine Yu” or “Josephine Te” who signed the documents, as an authorized representative of Kentex.

Sandiganbayan said it understands the plight of the people whose relatives perished in the fire, but noted that it has to uphold laws that govern the land.

“The Court commiserates with the families of the victims on that fateful incident, but it has to yield to the constitutional right of the accused to be presumed innocent.  Be that as it may, the acquittal of the accused in these cases does not preclude to a suit to enforce the civil liability springing from quasi-delict under Article 2176 of the New Civil Code,” it added.

With the decision, the hold departure orders issued against the following accused were ordered lifted, with the cash bonds posted for bail ordered released.