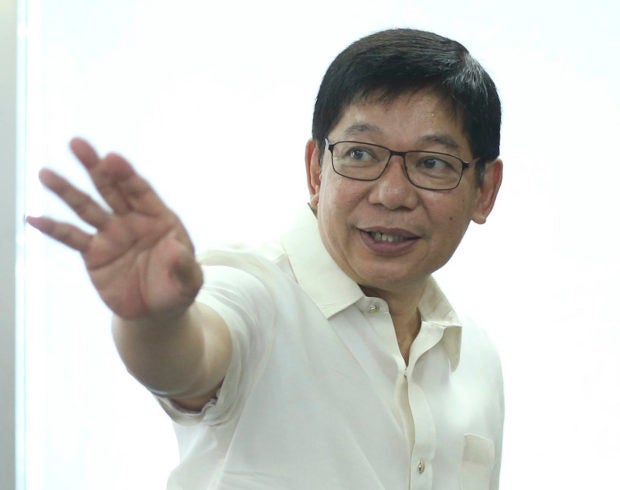 MANILA, Philippines — The chief of the country’s premier intelligence agency has been sharing “fake news” and other “misleading” posts on social media without verifying the source of the information and the veracity of the posts, which include attacks against progressive lawmakers.

This was revealed on Tuesday night when lawmakers scrutinized the proposed budget of the National Intelligence Coordinating Agency (NICA).

Speaking through Rep. Rufino Biazon in proceedings where only House members are allowed to take the floor, NICA Director General Alex Paul Monteagudo admitted that he had shared posts on Facebook that targeted members of the progressive groups.

Posts on social media, particularly Facebook, have drawn public attention recently after the social networking giant took down more than 100 fake accounts linked to the Armed Forces of the Philippines and the Philippine National Police that targeted activists and dissidents.

Monteagudo confirmed that he had shared “quite a number of times” posts from Facebook pages titled “Global Public,” “Peace Philippines,” “Pinoy Exposé,” and “Philippine Untold News.”

The NICA chief frequently shares the contents of these pages, four of the 21 sites he often takes posts from, according to Kabataan Rep. Sarah Jane Elago.

“What these pages are sharing are not a joke as they endanger the lives of people contained in these posts. Shouldn’t the NICA chief be more responsible since he is the director general of the premier intelligence agency of the government?” Elago said.These pages, Elago said, also supported the shutdown of ABS CBN and the filing of criminal cases against Rappler and its president and CEO, Maria Ressa.

These pages used “unverified information, doctored images, and fake news,” according to the Kabataan lawmaker.“One post that was shared by the NICA director had my photo and claimed that I was positive for COVID-19,” Elago said.

Monteagudo admitted that he did not know the authors and the administrators of the pages but claimed he shared the posts in his personal capacity to share them with his staff and NICA operatives.

Facebook last week said it removed scores of pages and accounts after they engaged in “coordinated inauthentic behavior,” a violation of its community standards.

“Although the people behind this activity attempted to conceal their identities, our investigation found links to Philippine military and Philippine police,” said Nathaniel Gleicher, Facebook’s cybersecurity policy chief.

Biazon said any public official found to have violated guidelines on spreading information on social media should “face the music and be held accountable.”

On Wednesday, the human rights group Karapatan, another frequent target of Red-tagging by security forces, demanded that the military and police disclose all their so-called “advocacy groups” following Facebook’s move.

Karapatan secretary general Cristina Palabay said the AFP, PNP and the National Task Force to End Local Communist Armed Conflict (NTF-ELCAC) must also disclose the money spent on “what is clearly a coordinated machinery of mass deception to vilify, discredit and incite state violence against critics and activists.”

“The people have every right to know and demand just how much of our hard-earned taxes are being spent on and pocketed by the people behind these pages, accounts, and groups that spout lies against activists and human rights defenders—especially in the middle of this public health crisis,” she said.

Without admitting that the government had a hand in putting up progovernment and promilitary “advocacy” pages on Facebook, President Duterte sought a meeting its representatives to discuss how the social networking platform could help his government in the “fight of ideas.”

Palabay said government-organized nongovernmental organizations participate in the administration’s counterinsurgency campaign and were being used to, among other things, “create the illusion of grassroots mobilization supporting the government’s fascist and anti-people agenda.””Any illusion of popular support for this regime is now out of the window.”

PNP spokesperson Col. Ysmael Yu told the Inqurier that Facebook has yet to respond to a request for a list of the alleged fake accounts run by the police for the PNP Anti-Cybercrime Group to verify.

He acknowledged that the social media giant had the “sole authority to make sanctions as it is in their control and no one else.”

“It has its rules and all should abide by it. If there are IB’s [inauthentic behavior] as detected by the owner, then it is the duty and obligation of that owner to take action to protect the integrity of the website,” he said.